Three sites have been investigated in 1993, all located in the northern region of the French part of the island.

The island of St. Martin is one of the "composite" islands of the Lesser Antilles and is situated near the 63° western longitude and just north to the 18° northern latitude of the Western Hemisphere. The island is politically divided into two parts, the northern French part and the southern Dutch part. The French side with its capital Marigot is larger, around 52 km2, to 32 km2 for the Dutch side. The Dutch part with its capital Philipsburg is part of the Netherlands Antilles. The French side of St. Martin is incorporated in the Department of Guadeloupe which belongs to France. The eastern side of the island is mountaineous with its highest point at 424 m, Pic du Paradis, while the western side is flat. Around the island there are several bays and beaches. 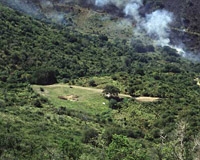 Three sites have been investigated, all located in the northern region of the French part of the island. These sites can broadly be dated from the end of the third millennium BC to the ninth century AD and thus cover a large part of the early pre-Columbian occupation of the island. 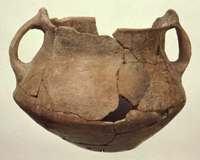 The pre-Ceramic site of Norman Estate is the first pre-Ceramic site discovered on the island. A survey and test excavations were conducted at the site by a team of master students (Tom Hamburg, Alex Brokke, Sebastiaan Knippenberg and Mark Nokkert). 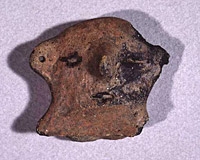 Hope Estate is a multi-component Saladoid site The importance of this site lies in the possibilities to contribute to the issue of the early ceramic colonisation of the Caribbean islands. Several mechanisms, i.e. migration and divergence, have been hypothesized as being responsible for the occurrance of two distinctive ceramic styles or wares several centuries BC. 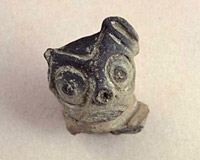 Anse des Pères is a Cedrosan Saladoid site has been subjected to a survey and test excavations. The investigations revealed a single component, shortly occupied settlement site and demonstrate the potential for further excavations, focussing on the layout of this site, the reconstruction of the residential structures and the compositional study of the pottery assemblage and especially its functional aspects. 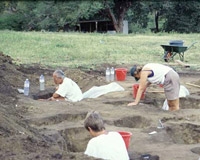 Investigations at this site were performed by a team of master students (Tom Hamburg, Alex Brokke, Sebastiaan Knippenberg and Mark Nokkert).