Saba is situated at 63° 14' W., and 17° 38' N., approximately 50 km south of St. Martin and 30 km northwest of St. Eustatius. The island of St. Croix, U.S. Virgin Islands, lies 80 km in a westerly direction. Saba is one of the smaller islands of the Lesser Antilles and has a surface area of only 13 km². Its small surface area, the pronounced relief, which leads to a slightly higher level of precipitation than the surrounding islands, and its difficult access, give Saba an exceptional and unique character. 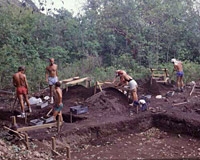 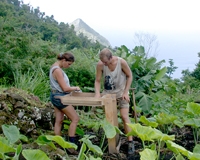 Recent investigations on the island of Saba, northern Lesser Antilles, revealed evidence of preceramic occupation in the northwestern part of the island at an elevation of approxinately 400 m above sea level. The inland location of dense midden deposits in a tropical forest environment makes the Plum Piece site unique for studying the preceramic occupation of the Antilles, a period that is otherwise mainly known from coastal settings. 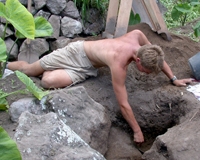 The recovered artifacts and the radiocarbon dates support an attribution to the Archaic period of the preceramic Age. The nature of the tools and the restricted number of exploited food sources suggest a temporary, probably seasonal, occupation of the site for a unique activity. 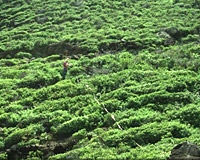 Saba appears to have been inhabited for the first time by Ceramic Age people during the late phase of the Early Ceramic Age (i.e., around AD 400) as is evidenced from the sites of Spring Bay 1a and Kelbey’s Ridge 1. Ceramics from this period are characterized by traits of the Cedrosan Saladoid subseries. The major period of Saba’s pre-Columbian occupation is situated between AD 800 and 1200 (i.e., the early phase of the Late Ceramic Age), as is evidenced by the The Bottom, St. John’s and Spring Bay 1b, 2 and 3 sites. 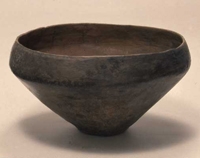 Ceramics from these sites belong to the Mamoran Troumassoid subseries. The sites of Spring Bay 1c and Kelbey’s Ridge 2 provide evidence occupation for after AD 1200. In accordance with the regional settlement pattern, a decline in sites is noticeable during this period. Ceramics from the Spring Bay 1c and Kelbey’s Ridge 2 show affiliations to the Chican Ostionoid subseries of the Greater Antilles, dating to ca. AD 1200-1500.