Since 2005 Leiden fieldschools have maintained local collaborations with archaeologists on Martinique carrying out surveys and excavations.

Martinique measures 60 by 30 kilometers, encompassing a total area of some 1100 km2, making it the largest island of the Lesser Antilles. It is ecologically diverse, from its low coastal areas characterised by shrubs and littoral vegetation to its mountainous areas covered by dense tropical rainforest. The most striking feature of the island must be the dormant volcano Mont Pelée, which erupted to devastating effect in 1902 and is known to have had a considerable impact in Amerindian times as well. St. Lucia lies to the south, making Martinique an attractive target of study to compare with our St. Lucian fieldwork. 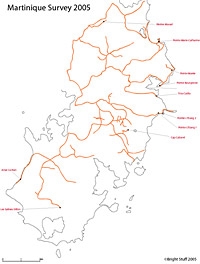 In February 2005, Martinique archaeologist dr. Benoît Bérard invited a team from Leiden to Martinique to carry out a survey of the interior of the southernmost tip of Martinique (district of Saint-Anne). The survey contributed to the general research programme into the late prehistoric era in southern Martinique. In all, the survey discovered 10 new archaeological sites, averaging about a site a day. Of these 10 sites, seven yielded ceramics, four yielded lithics and two yielded shell finds. All the ceramics discovered were non-diagnostic, late pre-Columbian and in a few cases probably Afro-Caribbean. 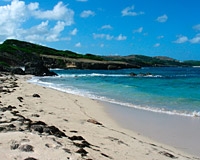 Lithic finds consisted predominantly of jasper in all hues and shapes, ranging from red to yellow and from flakes with percussion bulbs to plain chunks. Pointe l’Etang II yielded not only jasper, but quartz and possibly Antigua flint as well. The two shell finds were an isolated Strombus Costatus lip, in the riverbank of the Massel river about 1.5 kms inland, and a broken Strombus Gigas, located high up in the hills at Cap Cabaret about 1 km inland.

In June and July 2012 a Leiden Fieldschool was conducted at the late pre-Columbian site of Anse Trabaud in southeastern Martinique. Research at the site was a collaboration between the Service Regional d’Archéologie (SRA) of Martinique and the Caribbean Research Group Faculty of Archaeology, Leiden University with participation of local students from the Université des Antilles et de la Guyane, Martinique.

The settlement of Anse Trabuad has been long known to archaeologists and has been investigated at various intervals over the last 60 years, firstly by Henri Petitjean Roget and José Cruxent in the 1970s, intensively by Mario Mattioni (Service des Antiquités de la Martinique) and Louis Allaire in the 1980s, and more recently in the 1990s (Gros & Martin 1993). Despite these earlier investigations, and the abundance of recovered lithic, faunal and especially ceramic material, important questions relating to daily life of the pre-Columbian inhabitants and the settlement’s context within the wider region remained unanswered. 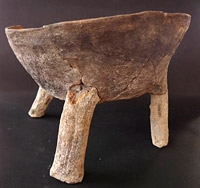 The aims of the 2012 investigations were to place Anse Trabaud in the pre-Columbian historical context of Martinique as well as within the surrounding Windward Islands. Specific research questions targeted issues such as the dating and chronology of the site, the horizontal and vertical stratigraphy, the state of preservation of potential settlement features and the spatial characteristics of the different settlement areas.

The setting of Anse Trabaud in both the landscape and seascape is central to understanding settlement dynamics. Situated on a dune between mangroves and salt ponds to the west, and the wild Atlantic to the east, inhabitants were able to exploit a range of marine and terrestrial resources. 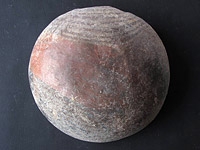 Abundant turtle bones and shellfish in the archaeological deposits attest to this exploitation, with turtles still nesting on the sandy beach today. The south of the site is bordered by the Savane des Pétrifications, an arid and ancient volcanic region rich in lithic resources (jaspers, quartz etc.). The settlement at Anse Trabaud shares many similarities with contemporaneous settlements up and down the coast from Macabou to the north and Grandes Salines to the west, as well as with neighbouring settlements across the sea passage between Martinique and St Lucia. An example is the site of Lavoutte, 40km canoe travel to the south, also the subject of a recent Leiden fieldschool. 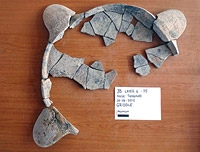 In 2012 field research concentrated on re-locating previous excavations, defining the boundaries of the site and excavating small units at regular intervals across the site to verify horizontal and vertical stratigraphy, and recover dateable material. The dense tree and bush cover made for challenging conditions for orientation and measuring necessitating a combination of compass, Total Station and differential GPS. Preservation at the site was outstanding allowing recovery of intact ceramic vessels, mainly cooking pots and griddles, and midden, pit and posthole features. A surprise was the recovery of deeply buried organic plant material and wood remains in association with cultural layers in several units in the west of the site. Organic material is very rarely preserved in tropi cal settings so this is a fantastic discovery. 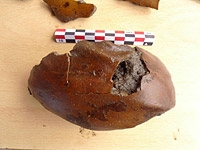 A fieldschool in 2013 will focus on reconstruction of the paleoenvironment as well as further investigation of the waterlogged deposits. Information from stratigraphic profiles attest to the dynamism of coastal mangrove environments, and the excellent preservation and the deep burial of archaeological layers indicates the geomorphological history of the site was complex, possibly involving flooding events and tectonic changes.