Long Island, an islet of Antigua in the northern Lesser Antilles forms the major source for flint in the Lesser Antilles. A survey by Hofman, Hoogland and van Gijn in 1989 has indicated the presence of various raw material sources. Test-excavations at the major flintknapping site of Flinty Bay show a very standardized reduction sequence. 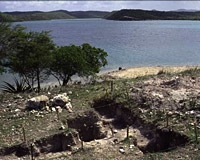 Enormous quantities of of debitage were found including corecaps, primary and secondary blades and flakes and discarded cores. Apparently, the aim was to obtain high quality cores, which could easily be transported. Although the basic reduction sequence was uniform, differences in platform preparation were noticed which may indicate that various groups of people were visiting the site to obtain the necessary raw material. 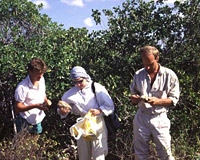