Coastal origins? A biogeographical model for hominin evolution and dispersal in Africa between 5 and 2.5 million years ago
Partners 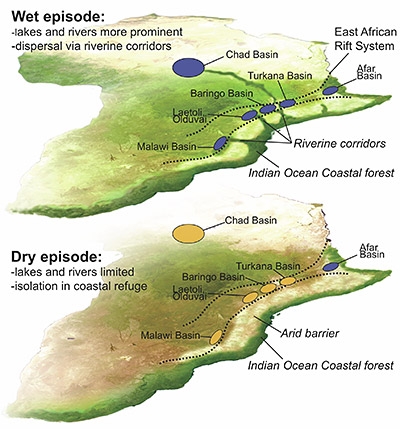 For the past 5 million years, Africa’s climate has been characterized by a series of alternating wet and dry periods.

Joordens proposes that the Indian Ocean coastal forest was a refuge for early hominins –and other water-dependent fauna- during dry periods. When environmental conditions improved during wet climate periods, these species could expand from the coast via riverine corridors to colonise basins in the inland East African Rift System.

This hypothesis will be tested in close collaboration with colleagues from e.g. Utrecht University, Rutgers University, George Washington University (both USA), the MNHN in Paris and the Max Planck Institute in Leipzig.

The project aims to answer the following questions: when exactly did the wet periods occur? Does this timing match with the pattern in fossil occurrences? Can we trace the presence and absence of riverine corridors in the genetics of modern freshwater fish?

The study aims to tackle hominin evolution from an ecological and biogeographical perspective, providing the spatial dimension that has been lacking thus far. And ultimately, it may become possible to predict the locations of new hominin fossil sites!