Between 1993 and 2000 the Faculty of Archaeology had a formal cooperation with the Service Régional de l’Archéologie de la Guadeloupe, Direction Regional des Affaires Culturelles (DRAC) and the then director André Delpuech. During that period surveys and excavations were carried out at a number of sites.

Between 1993 and 2000 the Faculty of Archaeology had a formal cooperation with the Service Régional de l’Archéologie de la Guadeloupe, Direction Regional des Affaires Culturelles (DRAC) and the then director André Delpuech. During that period surveys and excavations were carried out at a number of sites. These investigations were carried out under the responsibility of André Delpuech, Corinne Hofman and Menno Hoogland. Besides, in September 1997, a four-year PhD scholarship was granted by the Faculty of Archaeology of Leiden University (The Netherlands) to Maaike de Waal to conduct micro-regional investigations on the islands of La Désirade, Iles de laPetite Terre and the Pointe des Châteaux peninsula of Grande-Terre.
The Guadeloupean archipelago numbers more than 200 Amerindian sites covering all periods from preceramic times to the Late Ceramic Age.
The investigations primarily focused on the island of Grande-Terre. The islands of Basse-Terre, Terre-de-Haut (Les Saintes) and Marie-Galante are also known to have archaeological sites, but these were not included in the investigation project 1993-2000. The visibility in the Basse-Terre region is very low due to the dynamics of the river mouths, the dense vegetation and the hurricane events. On Marie-Galante several sites were inventoried prior to the 1993-2000 survey. Investigations took place at the site of Cocoyer St. Charles in 1999. Terre-de-Haut remains virtually unknown archaeologically until now. Archaeological investigations have on the contrary been done on the island of Terre-de-Bas (Les Saintes), and brief reference will be made to those here 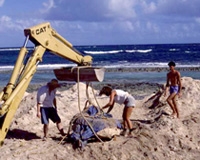 The site of Morel is located on the northeastern coast of Guadeloupe. The site lies directly facing the Atlantic on the beach of eastern Grande-Terre, the northern, limestone island of Guadeloupe. The coastal landscape has been severely altered by human and natural interference since pre-Columbian times. Nowadays, the former beach is eroded and the dunes have disappeared.
The site has been known since the 19th century but has only been the subject of intensive investigations during the 1950s and 1970s and then again during the 1990s. The context of the earlier excavated material is difficult to trace. Therefore, the present study only focuses on the pottery excavated during the 1990s’ excavations. 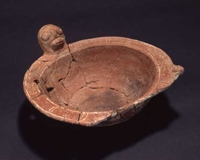 The site is composed of settlement and refuse (or midden) areas. Its four components (Morel I to IV), roughly dated between 400 B.C. and A.D. 1400, have long been used in Caribbean chronological charts to characterise the ceramic sequence for the northern part of the Lesser Antilles (Rouse 1992). The earliest component at Morel includes Cedrosan Saladoid and La Hueca style ceramics. Stratigraphically, there is no clear segregation between the two and radiocarbon dates from these levels range from 400/200 B.C. to A.D. 400. 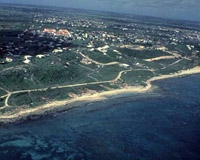 The site of Anse à la Gourde is situated at the north-east end of Grande Terre, Guadeloupe and thus exposed to the Atlantic coast. The site has been subjected to extensive investigations between 1995 and 2000. In total 1424 m2 have been excavated.

Ceramics are characterized by vessels with simple shapes, rarely decorated but often covered by a red slip. Incisions are large and shallow, modelled zoomorphic and anthropomorphic representations occur on the vessel rims. Legged griddles are present. Influences from both the northern (Mamoran Troumassoid) and the southern (Suazan Troumassoid) Lesser Antilles are evidenced in this ceramic assemblage. Excavations at the site took place between 1995 and 2000. 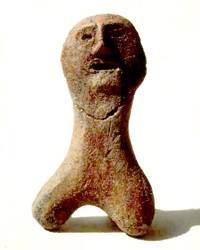 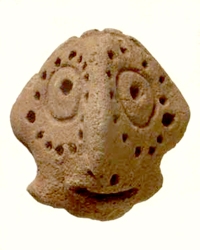 The site of Morne Cybèle site, has been investigated in 1994. It is situated on the plateau of la Désirade. On the west side of the site, there is equally a denser zone of artifacts, while the northern part revealed to be quite poor, as did the eastern part. The central part is relatively flat without depressions and revealed no material except for one anthropomorphic adorno. This means that the southwestern part of the site seems to be the most rich in artifacts all accumulated in depressions. The core of the site is estimated to have a surface area of 200 to 300 m2. A radiocarbon date on a Cittarium pica shell (GrN-20090) of 470 ± 30 BP corresponds to a calibrated date of AD 1440-1460.

The site of Grande Anse is affiliated with the Suazan subseries from the southern Antilles. The site is situated in the northeastern part of the island of Terre-de-Bas. The site is located in the village of Grande Anse on the northern bank of the gully. Because the site is situated in the middle of the build-up area of the village it is difficult to determine its extension. The gully forms the southern limit of the site. Excavations were limited to the refuse midden. A radiocarbon date (Cittarium pica GrN-20874) provided a date of 810 ± 30 BP or cal AD 1160-1280.

The site of Cocoyer St. Charles is located on the west coast of Marie-Galante, to the northeast of Pointe de Folle Anse. 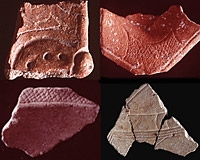 Like Pointe de Folle Anse, Cocoyer St. Charles occupies an interesting topographical position between ocean and swamp, on a large sandy coastal plain that, in general, possesses very good conservation qualities for archaeological material. Excavations at Folle Anse testify to the excellent geomorphological conditions of the site. The greater part of the site is covered by sugarcane and some small gardens and grazing fields that extend from the road to the swamp. Sheds of the various local proprietors are scattered over the fields.

The ensemble of material from pre-Columbian times that was recovered from Cocoyer St. Charles is evidence of the existence, in the vicinity of a swamp, of a small early Cedrosan Saladoid occupation. The site is situated less than one kilometer from the known site of Folle Anse. Folle Anse has known different occupational phases from the early Huecan and Cedrosan Saladoid period up to the Suazan Troumassoid era (400 B.C. – 1200 A.D.)

Anse à l'Eau, part of the commune of St. François, is situated on the coast of the south-eastern part of Grande-Terre, south of the town of Le Moule and the archaeological site of Morel. The fairly remote bay of Anse à l'Eau is reached by following a winding road down to the ocean from the N5 motorway.
The great extent and the vastness of the site was confirmed by all the prospective work, as was the notion that Anse à l'Eau has known very lenghty occupation, at least from early-Saladoid to post-Saladoid times. The distribution of artefacts from the auger programme and the testpits have allowed the identification of two possible zones of concentration that may be linked to a horizontal chronology, comparable to the one found on the nearby coastal site of Morel in Le Moule. An early Saladoid component seems present in the south-western part of the site, towards the interior. A post-Saladoid or Troumassoid component is present in the north-eastern part of the site, just behind the dunes.