The Middle Paleolithic site of Neumark was first discovered in the 1980’s by German geologist Matthias Thomae.

The Middle Paleolithic site of Neumark – Nord located some 35 kilometers east of Leipzig, Germany was first discovered in the 1980’s by German geologist Matthias Thomae. Investigations in this, then active lignite (brown coal) mine over the next decade were coordinated by Dietrich Mania (Halle and Jena), and led to the discovery of several Paleolithic lake basins each of which containing Pleistocene archaeology and fossil material.  These lake basins record various aspects of human activity in the Geisel Valley over the past 400,000 years. 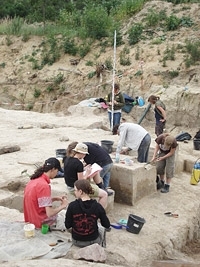 Measuring nearly 600 meters the largest of the basins NN1 was excavated during the mid 1990’s and yielded thousands of artifacts and impressive faunal remains.  The lithic remains are typical Middle Paleolithic in nature and demonstrate the use of a non-Levallois (prepared core) reduction strategy.

During the final phases of the excavation of NN 1 Mania and his team discovered another series of lake deposits 400 meters to the east, cropping out of the edge of the open cast mine. These deposits date to Late Saalian, the Eemian and early Weichselian stages.

Excavations of NN 2 began in 1998, under the supervision of Dietrich Mania and were funded by the Lausitzer und Mitteldeutsche Bergbau Verwaltungsgesellschaft mbH (LMBV), which is the company in charge of the mine. 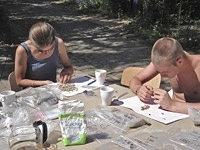 Since that time mining operations have ceased in the area and the German government has begun the re-naturalization of the mine.  By diverting water from the river Saale this former mine will become one of the largest artificial lakes of central Europe. This operation has threatened all sites at Neumark – Nord and prompted the rescue excavation of the remaining sediments at NN 2.

Excavations at NN2 started in 2003. Directed by the Landesamt für Archäologie und Denkmalpflege Sachsen-Anhalt (State Office for Archaeology Saxony-Anhalt) in cooperation with the Römisch-Germanisches Zentralmuseum (RGZM) excavations began at NN 2 in the spring of 2005.  At the invitation of the RGZM the University of Leiden joined the operation in the summer of 2006. 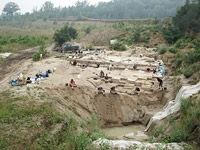 Throughout the entirety of this excavation more than 10,000 artifacts have been unearthed, half A small field school was established concentrating on the excavation of the Weichselian layers of NN 2/0.  This excavation was designed to expand the area exposed by the initial excavations conducted a few years earlier in hopes of gaining a better understanding of site formation and post-depositional processes at work in these layers. The archaeology associated with the sandy shore horizons comprising the Weichselian layers of NN 2/0 is considered by some to be a local variant on the Micoquien/Keilmessergruppen cultural tradition.  of which are lithic remains. The faunal remains at the site, though highly weathered, are dominated by both bovid ( Bison priscus) and equid ( Equus sp.) remains.  Most bones show traces of butchery or marrow extraction and are presumed to be the product of anthropogenic influences.

In 2007 a larger venture was undertaken by the RGZM and the universities of Leiden and Mainz, coordinating students from several institutions around the world.  This excavation was aimed at excavating the then separate Eemian and Saalian layers of the lake basin NN 2, located approximately 100 meters to the north of NN 2/0.  The sub-layers were defined as NN 2/1 for the upper horizon and NN 2/2 for the lower archaeological phase. 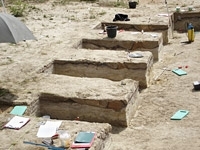 In the three field seasons of work at this site an as tounding amount of archaeological material has been recovered, totaling more than 75,000 artifacts.  This assemblage is typical of other Middle Paleolithic assemblages found in the area, such as Taubauch and Weimar-Parktravertin as it is composed mostly of flakes, some of which were manufactured using prepared core or Levallois technology.

Though only in its preliminary stages of interpretation the faunal assemblage of NN 2 is dominated by interglacial faunas.  Representative species including bison ( Bison priscus), aurochs ( Bos primigenius), horse ( Equus sp.), red deer ( Cervus elaphus) and straight-tusked elephant ( Elephas antiquus) are present.  Like N/N 20 most bones show the traces of human interference such as cut-marks and/or fracturing. 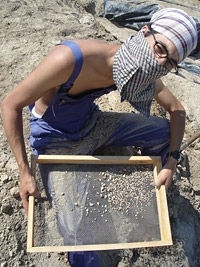 The goal of the 2007 field campaign was to educate students in Paleolithic excavation techniques while uncovering information vital to understanding the process of site formation and the over-all sequence of the fossil lake.  Investigations into the relationship between the two main horizons of NN 2 are still underway.

For 2008, excavations have been designed to go as deep as possible in the already exposed lake basin, uncover the remaining shore area of NN 2 and other areas significant to answering questions of geological sequence, site formation and post-depositional processes.  Students will be trained in Paleolithic field techniques, site documentation and artifact preservation, curation and interpretation. 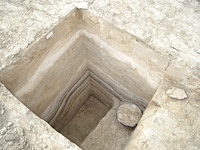 Due to the rising water level this will be the last year this site will be available for excavation.  Neumark Nord 1 and NN 3 have already been completely inundated.  Striking a balance between the educational nature of a field school and the rapid paced timing of a rescue excavation is therefore a primary concern for the 2008 campaign.

This site will serve as a testing ground for several advanced archaeological techniques and computer applications coordinated by Dr. Hans Kamermans (Leiden) and include the use of differential GPS for site mapping and recording of artifacts, the application of an online data base (Surfnet) which provides real time access to all data associated with the excavation and personal interpretations and the digitizing of all site data recovered thus far. 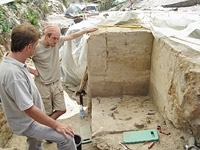 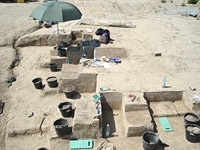 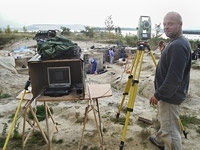 All excavations at Neumark are a joint product of the State Office of Archaeology (the Landesamt), the RGZM, the University of Mainz and the University of Leiden.  In general, all field work and analysis is overseen by Thomas Laurat and Enrico Brühl (LDA) and Dr. Dimitri De Loecker (Leiden) with Lutz Kindler (RGZM/Mainz) and is overseen by Profs Sabine Gaudzinski-Windheuser (RGZM/Mainz) and Wil Roebroeks (Leiden) in association with Dr. Harald Meller (LDA).

The 2007 University of Leiden field school was facilitated by all aforementioned persons and coordinated by Dimitri De Loecker (Leiden) and Lutz Kindler (RGZM/Mainz) in association with Adam Jagich (Leiden) and Priscilla Schoondermark (Leiden).

Our knowledge of the NN 2 sedimentary sequence has profited enormously from the work conducted previously, under the coordination of Professor Dietrich Mania, prior to the beginning of the current project. Paleoecological reconstructions using pollen and mollusks found at the site is currently being done by Prof. Dr. Corrie Bakels and Wim Kuijper (Leiden).  In 2008, paleomagnetism will be conducted by Douwe van Hinsbergen (Utrecht) and Mark Sier (Leiden).