Spaanse Water (Eng. Spanish Water) is located in the southeastern part of the island, at the foot of a table mountain, and was threatened by resort development. The archaeological project was carried out in cooperation with the Santa Barbara Plantation, prior to the construction of a golf course.

A cluster of shell deposits dating from pre-ceramic and ceramic periods borders the shorelines of the inland water. The deposits are interpreted as temporarily visited shell-collecting and processing stations. 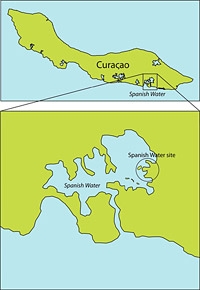 One deposit, A, interpreted as a cooking pit consisted of 99% fragmented dolphin bones, partly burned, including 76 periotica, or ear bones. These belong to at least 41 individuals and at least four species of dolphins of the Stenella and Delphinus family are represented in the assemblage.

The large number of individuals could suggest that the animals were victims of a massive stranding. But the cooking pit is too small to process that amount of meat at one time. This is probably evidence for regular dolphin-hunting and butchery in the Spanish Water lagoon. Most of the animals were transported to the settlement uncooked, but a couple of animals were cooked on the spot.

The different site contexts and Amerindian resource procurement in Spanish Water are discussed in a paper published in the IACA proceedings in 2009, see below.