An Investigation into the role of copper-alloy craft production in the early medieval economy of northwest Europe.

The analysis and interpretation of Copper-Alloys is one of the longest ongoing research projects within archaeological science. Traditionally this research has tried to link objects with distinct metal sources, an approach that can be demonstrated as being 'Fatally Flawed' (Bray et al. 2015). Rather than traditional provenance, the 'life history' of copper-alloy objects can be studied through the chronological and geographical nature of 'metal flows'.Hand-Held X-ray Fluorescence is a suitable technique to be applied to this topic, but the interpretation of the results requires a ‘form and flow’ paradigm shift. This enables us to address questions surrounding the social organisation of production and its role in the early medieval economy. This is particularly important in understanding the contribution made by craft production to the greater economy and the post-Roman 'recovery' in the west.

The debate on the nature of the economy of the Carolingian age is now more than a century old, and various aspects have been widely discussed, such as agrarian production, trade, elite demand and craft production. The social organisation of production and more specifically the amount of elite control placed on production, by the lower classes, be they peasants or craftsmen, took centre stage in this debate. An insufficiently answered question up until now has been: What contribution did craft production make to the economy as a whole? In the past both historians and archaeologists have attempted to tackle the problem. Archaeologists have investigated both finished products and the remains of production sites (mainly pottery) in their efforts. More traditional research used the macroscopic analyses of material remains and their distribution across various regions. But modern research has increasingly included the use of new scientific methods to bring us a step nearer.
Hand-Held XRF is one of these new scientific methods and through the gathering of large amounts of compositional data it is hoped that observed variations in alloy use can tell us much more about production specialisation, standardisation and craft organisation in early medieval NW Europe. 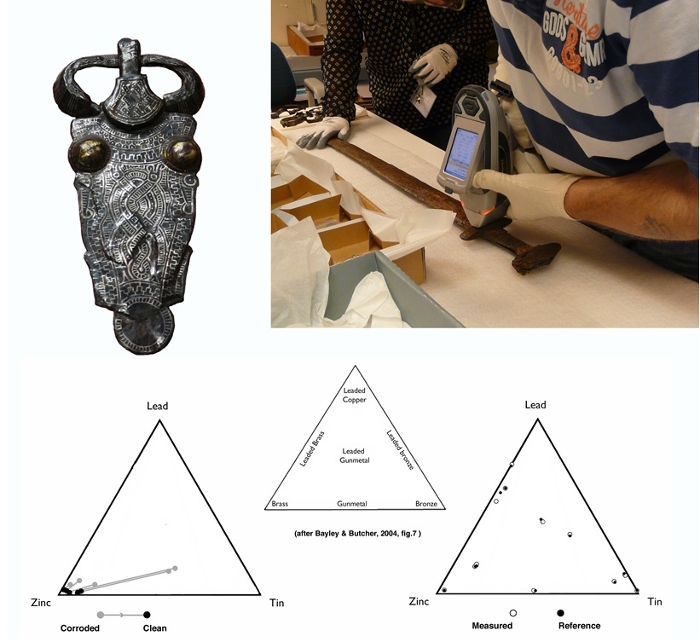 2014 saw the 1200th anniversary of Charlemagne's death, which was commemorated widely across Europe through a series of exhibitions, conferences and public events. These activities served to highlight an increased interest in the structural characteristics of the Carolingian empire, the first post-Roman empire in the west.

Understanding Carolingian society, including its economics, is crucial for understanding the processes that led to the post-Roman or medieval 'recovery'.

My research contributes to this topic by investigating the production of copper-alloy items from the end of the Roman period to the beginning of the Middle Ages, but with a focus on the changes brought about as a result of the rise of the Carolingian empire.

The debate on the nature of the economy of the Carolingian age is now more than a century old, and various aspects have been widely discussed, such as agrarian production, trade, elite demand and craft production. The social organisation of production and more specifically the amount of elite control placed on production (imposed on the lower classes, be they peasants or craftsmen), took centre stage. The social position of craftsmen, at times considered to be 'middle class‘ and crucial to the development of the economy, was a key subject in this debate.

My research contributes substantially to this debate by analysing large numbers of copper alloy items, through a combined typological and compositional study. This social approach is relatively new but is gathering momentum.

For over 200 years compositional data has been consistently used to try and link objects with distinct metal sources and the recent work of Dr Peter Bray at Oxford University demonstrates that this traditional provenance model for copper alloys is 'fatally flawed'. This is because the traditional pursuit of ‘pure’ source signals, leads to the chemical and isotopic datasets being removed from their context and history.

Social engagement with metal through processes such as reuse, recycling and curation were rarely given consideration by this traditional model. Bray and his co-researchers, including Mark Pollard, Professor of Archaeological Science also at Oxford University, offer an alternative model, one that unites compositional datasets and process-metallurgy with geographical, chronological, archaeological contexts and new conceptual approaches. Rather than provenance studies therefore, they suggest an empirical model of metal flow. Here objects are seen as snapshots of a wider metal stream; their final scientific characterisation including echoes of their previous forms and contexts. This similar approach by the team at Oxford demonstrates the need for an effective interpretation of compositional datasets, one that can disentangle the complex life histories of copper-alloy artefacts. This is the approach adopted in the project Charlemagne's workshops.

For the compositional study I chose to employ Hand-held X-ray fluorescence, in a new and non-destructive way, focusing on personal belongings such as brooches, belt fittings and strapends, which were produced massively in the Roman and early medieval periods. The data from this   study provides us with snapshots of the wider metal 'pool' (much of it recycled) that craftsmen were able to draw from. Studying their choices through a more socially embedded methodology furthers our understanding of human interaction with copper-alloy in general, and the social organisation of early medieval production in particular.

Researchers at other institutes