The Zmapp medicine has been developed with funding from the US government within the framework of the Small Business Innovation Research programme. The European Commission tried to emulate the success of this programme within the EU. Has its effort been adequate and sufficient? Is procurement of research and development services effectively regulated in the European Union? 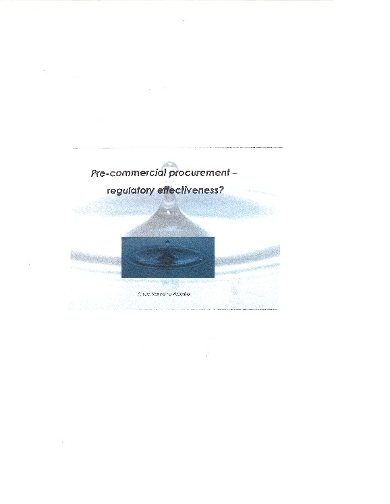 Is public procurement of research and development (‘R&D’) services the key to European Union (‘EU’)’s sustainable welfare? Is it being regulated in accordance with economic prescripts for effectiveness? Is the regulatory and policy setting clear and comprehensive in order to stimulate a widespread use of this instrument by EU public authorities?

In 2007, the EU released an Interpretative Communication, explaining how to purchase R&D services in compliance with the EU public procurement and State aid rules. The prescribed procedure was named ‘pre-commercial procurement’ (‘PCP’). The motivation advanced for adopting this Communication was the need to clarify the applicable law, in order to encourage public authorities throughout the EU to engage in R&D services procurement. The EU policy makers aimed to help the public sector become a sophisticated customer, capable of steering the development of cutting-edge technologies towards the resolution of public needs. This would yield solutions to serious problems such as climate change, pressure on the health system due to an ageing population, security threats etc. In addition, it would strengthen the competitive advantages of European private innovators on global markets. Eventually this would strengthen EU’s economy and would increase the welfare of its citizens.

The Interpretative Communication regarding PCP (‘PCP Communication’) was not substantiated by an extensive economic debate on the effectiveness of government intervention in support of innovation. It was based on the belief that EU could emulate the perceived success of the United States (‘US’) in using R&D procurement. The experts hired by the European Commission to confirm the desirability of R&D procurement argued that the US had used R&D procurement strategically as part of its Small Business Innovation Research (‘SBIR’) programme, to create new industries (e.g. the semiconductors industry, the Internet etc.) and to turn domestic suppliers into world market leaders.

The EU adopted the recommendations of the experts and molded the desired R&D procurement  procedure into the legal framework governing the EU. This led to major differences between the PCP and its source of inspiration, the US SBIR. Even assuming that government action can be effective in spurring innovation, the Communication missed a careful analysis of the success factors of such action within EU’s unique economic, political and sociological conditions.

A complex and unappealing procedure

The PCP Communication was adopted at a time when the UK and the Netherlands had experimented with national  R&D procurement schemes. These schemes targeted national companies, and risked to turn into wasteful subsidy races, in breach of the EU rules on State aid.

The PCP Communication used a strict interpretation of the applicable law to the procurement of R&D services as a means to foreclose such discriminatory actions by individual Member States. However, defining strict legal boundaries did not create an optimal setting for deploying the public procurement of R&D services. The result was a complex and unappealing procedure. Few individual public authorities in the EU understood the rationale for the implementation of PCP.

How to improve the legal and policy framework for a wide and effective use of R&D procurement ?

Starting from the premise that R&D procurement can be successful in providing competitive advantages to domestic private innovators, Ms. Apostol’s research identifies several key economic prerequisites for effectiveness and investigates whether these are being accommodated by the current practice and by the applicable legal framework in the EU.

She proposes ways of interpretation of the current procurement legislation in order to serve PCP’s purposes and argues for legislative amendments to simplify and clarify the difference between R&D public contracts and R&D subsidies.

Finally, Ms. Apostol’s research underlines the need for supplementary policy guidance on key concepts to the correct and effective implementation of PCP, such as R&D (services) or sharing of IPR and other benefits between the public authority and the PCP participant.