Objective justification and Prima Facie anti-competitive unilateral conduct : an exploration of EU Law and beyond

The prohibition of anti-competitive unilateral conduct by firms with market power is not absolute, but allows for derogation. 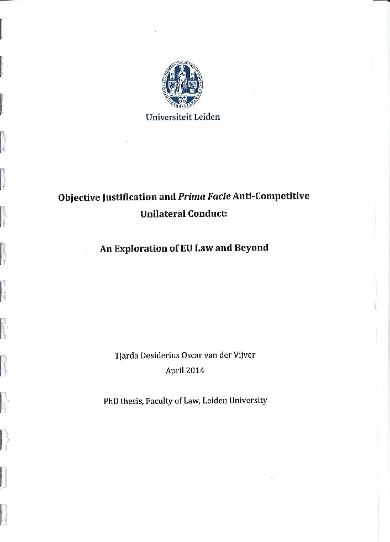 For the purposes of EU law, the ECJ has accepted that a so-called ‘objective justification’ plea may be invoked in the case of a prima facie abuse of dominance. Even though this is long-standing case law, many uncertainties remain as to its interpretation. This thesis contains a detailed examination of this concept of ‘(objective) justification’, focusing in particular on its scope and the applicable legal conditions. The thesis submits that this concept is highly important, as it can steer Article 102 TFEU away from a formalistic approach and give ample weight to the prevalent context. Although the thesis focuses on EU law, it also seeks inspiration from the approach in other jurisdictions. A comparative study includes relevant cases from various EU Member States (France, Germany, Ireland, Luxembourg, the Netherlands, Spain and the UK) and non-EU jurisdictions (Australia, Canada, Hong Kong, Singapore, South Africa and the US). The study reveals that these jurisdictions have accepted the availability of a justification plea, and have dealt with the concept in strikingly similar ways.