Can Chinese legislation on informational privacy benefit from European experience? 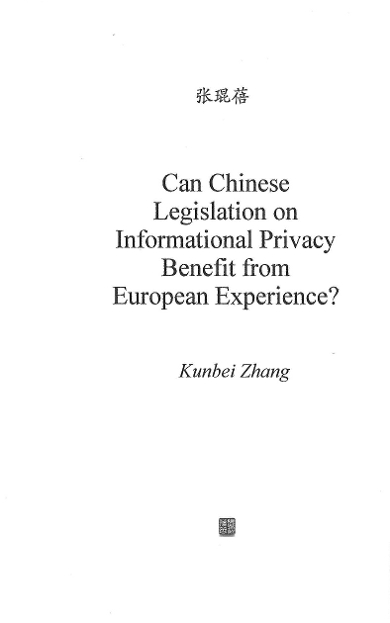 Twenty years ago, the enactment of Directive 95/46/EC raised a new playing field at EU level. The long-awaited Directive showed a convergence of political opinions in the Member States on how to regulate data protection. The Directive is granted with legal binding forces because it requires the Member States to ensure national laws comply with it. A European-wide legal system over data protection issues was established. It was implicitly assumed to be the template for the rest of the world to emulate. However, repeated waves of scandals about abusing the right to personal data have followed one by one in Europe, for instance, the passenger name record debate in 2004, the SWIFT case in 2006, the Snowden case in 2014. All came in rapid succession. These scandals have shaken people’s confidence on European legal system over data protection issues. European lawyers have come to view data protection law more skeptically, emphasizing the influences of technology and asking for a stricter legislation.

In the meantime, Chinese lawyers propose to transplant Directive 95/46/EC to improve current situation on data protection. Today, in China, there is no comprehensive legislation at a national level. The traditional legal arrangements for privacy protection are still applied to data protection issues, such as the arrangements for contractual and tort liabilities. Specific rules and provisions governing the use of personal data are scattered over different laws, regulations and local ordinances, and therefore not very effective. Thus, the legal transplantation proposal aims to bring the data protection level up to a higher standard on protecting consumers data rights.

How to improve Chinese current situation?

Do we have a better idea to improve Chinese current situation? Zhang proposed that it would be more optimal to borrow a fraction of the European data protection rules rather than to clone the whole system. The immediate focus should be to evaluate the European data protection rules: what does it work well and less well? She did some trials in applying Complexity theory to evaluate. Based on this evaluation, Zhang concluded with suggestion that Complexity theory-based analyzing model could be used to predict the development of data protection law in practice. This theory could help legislators to evaluate the outcome of legal intervention: whether a legal intervention is desired and when it is desired to intervene? The finding could be operated as checks against some of the mistakes of current transplantation proposal. It is against this background that Zhang expects that regulation over data-protection issues stand to benefit from being informed through the lens of CAS theory.