Isis on the Nile

The fourth conference of Isis Studies was organised by Liège college and has now been published by Laurent Bricault and Miguel John Versluys.

Isis on the Nile

Meeting at the first international conference of Isis studies in Poitiers in 1999, they soon joined forces. After a second conference in Lyon (2002), the third and largest meeting so far was organised in Leiden (2005) and its proceedings were co-edited by Bricault and Versluys; as was the fourth, organised by Liège University in 2008 and just published as Isis on the Nile. Preparations for the next conference, which will take place in Boulogne sur Mer in the fall of 2011, are now being finalized.

With their attention for theory, their coherent focus on a specifically selected subject and their bringing together of different research traditions, the tree-yearly conferences and their proceedings have quickly established themselves as a crucial instrument for the development of the Isis studies and, more in general, the question of Eastern influences in the Hellenistic and Roman worlds.

Very well received by classicists, ancient historians, archaeologists and religious scholars alike, the series of proceedings aims at being the theoretical backbone of the flourishing and quickly developing sub-discipline of the études isiaques.

The conferences and their proceedings have generated a lot of scholarly debate, also amongst a new generation of young and upcoming researchers. To encourage especially the latter development, Bricault and Versluys organize, preferably on a yearly basis, an international PhD research day where young scholars from all around the globe meet to discuss their ongoing work in progress. So far, very
successful and stimulating meetings have taken place in Toulouse (2010) and Leiden (2011).

Laurent Bricault (left) studied Egyptology at the Sorbonne with the famous French Egyptologist Jean Leclant. Through his PhD studies, he focused on one of Leclant's most important specializations: the systematic study of the remarkable diffusion of the cults of the Egyptian gods over the Mediterranean in the Hellenistic and Roman periods. Pursuing the unfinished projects of his maître, over the last decade Bricault has provided extensive catalogues (published by the Institut de France) with all the epigraphical sources, numismatic data and the relevant archaeological material. In 1999 he initiated what would become a series of conferences devoted to a critical exploration of all this material and the concept of 'oriental religions' in itself. At present he is a professor of Roman History at Toulouse Le Mirail University. 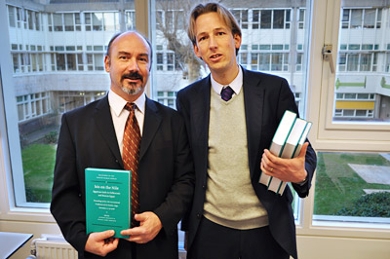 Miguel John Versluys (right) studied Classical Archaeology and Ancient History at Leiden University with Paul G.P. Meyboom and Henk S. Versnel and obtained his PhD with a study on Nilotic landscapes in the Roman world. At present he is coordinating a VIDI research project funded by The Netherlands Organisation for Scientific Research (NWO) entitled Cultural Innovation in a Globalising Society: Egypt in the Roman world. He is associate Professor at the Leiden Faculty of Archaeology.