Book by Dr. Mariana Françozo resulting from her research into the collection of count Johan Maurits of Nassau-Siegen, governor of the Dutch colony in Northeastern Brazil between 1637 and 1644.

The book is the result of her PhD research into the collection of count Johan Maurits of Nassau-Siegen, governor of the Dutch colony in Northeastern Brazil between 1637 and 1644. During that time, Nassau amassed one of the most interesting collections of curiosities of his time. It comprised objects received as gifts from his indigenous, African and Brazilian allies. After having returned to The Hague in 1644, Nassau slowly gave away the items of his collection as gifts to powerful European rulers, such as Louis XIV of France and Frederick III King of Denmark.

De Olinda a Holanda focuses on the circulation of people, artifacts and knowledge in the Dutch Atlantic during the 17th century. By employing the 'biography of objects' approach, Mariana studied on the trajectory of specific items in the collection such as a set of feathered artifacts now belonging to the National Museum of Denmark and a silver baptismal basin first produced in Potosí in the late 16th century presently kept by the Evangelical Church of Siegen. By analyzing historical sources as well as the physical transformations that these objects underwent, the book identifies the changing uses, meanings and values ascribed to such objects in the course of 17th century. Likewise, the book explores the production of visual and textual narratives about the Brazilian colony in early modern Europe. It looks specifically at Dutch seventeenth-century travel accounts and ethnographic images in order to shed light on how European interpretations of indigenous knowledge and indigenous cultures circulated and were slowly incorporated into the European canon. 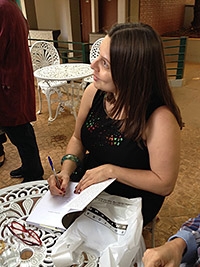 The book brings forth a connected history in which indigenous peoples, African leaders and European rulers are the active agents of transatlantic colonial politics and diplomacy.

The book was published with the support of the Brazilian grant agency  FAPESP as well as of the Faculty of Archaeology, Leiden University. It has so far sold about 300 copies in a little less than two months.