Discovery of a unique silver bowl from the Early Middle Ages

On an excavation site in Oegstgeest Leiden University archaeologists discovered a very rare silver bowl from the first half of the seventh century. The bowl is decorated with gold-plated representations of animals and plants and inlaid with semi-precious stones. The discovery suggests the existence of an elite with a wide international network in Oegstgeest.

Researchers are assuming that the bowl, which is 21 centimetres wide and 11 centimetres high, was buried as part of a ritual sacrifice. Such gilded discoveries are extremely rare. This one is exceptional because such bowls were usually made of bronze. In addition, they were not, as a rule, lavishly decorated with gold leaf. This means that we are dealing with an artefact that is unique, not only for the Netherlands, but for all of Western Europe. (Until the discovery of this bowl there were no indications of the presence of a local or regional elite on the Oegstgeest settlement. It may be that in this period some members of the elite lived on ‘simple’ farms.) 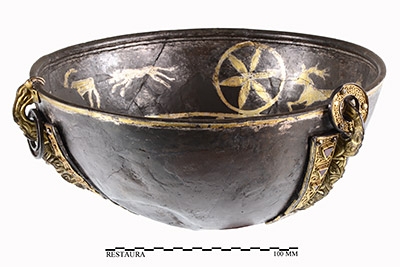 The bowl, which was presumably used as a drinking vessel or washbasin, is composed of a number of elements dating from different periods. The oldest element, the bowl itself, probably dates from the Late Roman Empire and the figures seem to indicate that the bowl originated in the Eastern Mediterranean or the Middle East. The other decorations date from the first half of the seventh century and show signs of German cultural influences, while the bowl’s suspension rings are characteristic of England and Scandinavia. Together, these elements symbolise the international position of the Netherlands fifteen hundred years ago. 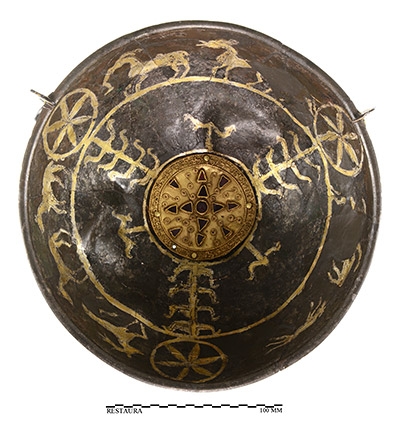 Large village from the sixth and seventh century

This rare object was discovered a year ago, on 4 June 2013, in Oegstgeest, on the grounds of the Leiden Bio Science Park. The discovery was not announced earlier in order to allow the excavations, which continued until the end of June 2014, to proceed undisturbed. The bowl was found while excavating the remains of a large village from the sixth and seventh century. The village was located on the Rhine and intersected by a multitude of small waterways. The bowl was found along one of these waterways.

Where is the bowl now?

This research was funded by Leiden University and led by Leiden archaeologist Jasper de Bruin. The Province of South Holland commissioned a restoration of the bowl. On 1 July, the bowl was transferred, on a long-term loan, to the Dutch National Museum of Antiquities, where it can be admired until 26 October in the context of the exhibition on the ‘Golden Middle Ages’. Following this period, the bowl will be integrated into the permanent presentation on ‘Archaeology in the Netherlands’. The bowl remains the property of the Province of South Holland.