Cross-talk between stagnation points in flow and orientation

Publication in Proceedings of the National Academy of Sciences.

What happens when you press two books horizontally against each other? The built-up pressure eventually will be released in an upward motion of the top pages and a downward motion of the bottom pages, like mountains that form from the earth’s crust, but in two directions. However the question remains which way the center page goes. In theory, this is undecided, and soft matter physicists call this a stagnation point or defect. Also fluids have stagnation points, for example a whirl in a bathtub. In the exact center, the fluid is at rest, but further away it winds around the core.

Fluids endowed with internal orientational order, such as liquid crystals, might possess defects not only in the flow velocity, but also in the average orientation of their molecular building blocks. These orientational defects, known as disclinations, are among the most characteristic and intensively researched features of liquid crystals. Leiden physicist Luca Giomi is one of those researchers. ‘Display makers hate those defects and spend fortunes on expensive glass-rubbing machines to get rid of them. Soft matter physicists, on the other hand, love these tiny singularities and try to device ways to exploit them.’

In a paper recently published in PNAS, Giomi and collaborators describe their discovery of an intriguing 'cross-talk' between defects in different material fields: the fluid velocity and the average molecular orientation. Giomi: 'Defects having the same rotational symmetry attract each other even if they belong to different fields. So a stagnation point in a two-fold symmetric flow (center-top panel, edit.) acts as a tweezer for a two-fold disclination (right-top panel, edit.).’ Stagnation points in flows with higher symmetry (i.e. three-fold, four-fold etc.) attract more complicated disclinations where the orientation winds around the defect core more than once (lower panels). 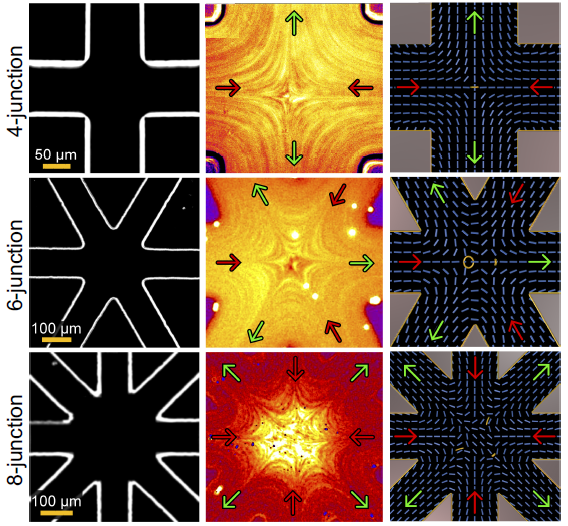