This occasion also featured the presentation of the first album of the philharmonic wind band of the town of San Cristóbal Chichicaxtepec, Mixe. In this town Araceli worked for more than 5 years in the development of her PhD research on which the book is based on.

Friends and songs of Chichicaxtepec

El tiempo y la sabiduría (Time and Wisdom) was released almost 2 years ago. However, the author had the firm conviction to do this presentation along with her friends of Chichicaxtepec who live 6 hours away from Oaxaca city. The right time had to be awaited until the band could celebrate and promote their debut album which features ten songs or sones deeply rooted in the traditions of the northern highlands of Oaxaca. The band is formed by 23 talented musicians, most of them teenagers. 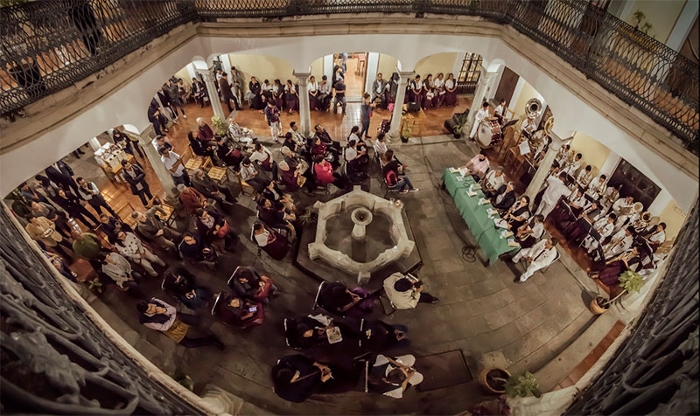 The event got attention from Oaxacan citizens who had the chance to listen to the concert offered by the band of Chichicaxtepec in one of the inner patios of the early 18th century building which now houses thousands of books and important collections such as the manuscripts of historian Manuel Martinez Gracida.  The book was commented on by Juan Carlos Reyes Gomez (Leiden University) and Carlos Sánchez Franco (Asamble Mixe para el Desarrollo Sostenible). The book was given for free to the public, and it still is, as a way to contribute to sharing anthropological knowledge.

The publication of this book was given an award in 2013 by the Ministry of Cultures and Arts of Oaxaca. It was recognised as one of the best investigations of the peoples and cultures of Oaxaca. The book gives account of the use of a specific time-count made up by the combination of 20 signs and 13 numbers (260 days), which was one of the essential traits of ancient Mesoamerican civilisations. Extremely fascinating is the fact that this calendar persists in some very few contemporary communities of Southern Mexico and Guatemala, of which Chichicaxtepec is one of these. Here, the “daykeepers” who handle this knowledge are all women, specialists in healing, divining and performing rituals according to prognostications and prescriptions of this sacred calendar. The aim of this research was to record the count of the days along with its relationship to other culturally significant symbolisms such as ritual, divination, worldview perceptions, and origin narratives.  This work expects to shed light on Mesoamerican calendars research, but also provide a respectful and dignified description of Ayöök (Mixe) people’s heritage.