‘The sky is not the limit for Honours students’

Making Mars suitable for human habitation or giving first-year lectures as a student. For the past three years, 150 bachelor’s students have followed a challenging Honours track alongside their regular study programme. On 15 November they were awarded a certificate for their achievements.

Caps in the air!

The official ceremony was followed with the now traditional relief: 150 cheering students threw their caps into the air at the Hooglandse Church. This marked the culmination of three intensive years full of exciting internships and remarkable professional assignments that benefit society as a whole. The students could choose between an Honours track at their own faculty or in a completely different field.

‘The sky is not the limit for Honours students,’ says physicist David van Driel remarked in his speech. And he meant it quite literally. Together with fellow students he devised a solution to make the toxic soil of Mars habitable. E. coli-bacteria can degrade the toxic substance perchlorate, thereby releasing oxygen. Their idea was met with enthusiasm as far as at the United Nations. Van Driel: ‘I have come to believe that anything is possible if you really want it!’

Stepping out of your comfort zone

Honours student Sandy Al-Mansour described a similar experience. She used to think that learning was boring, she said in her speech. She much preferred reading Shakespeare to learning grammar, but that was not allowed. After one year of studying music management at a university of applied sciences she surprised her friends and family by switching to an academic university programme. And once she started studying Law in Leiden she made it her mission to enter the Honours Academy. ‘People here encourage me to step out of my comfort zone. The Honours Academy has given me so many opportunities, from internships to unconventional classes. I even had the chance to teach first-year lectures. I have learnt that you can become whatever you want to be. But that does require a challenging environment.’

Make the world a better place

Vice-Rector Hester Bijl looked back with satisfaction. This is the fifth year of certificates being awarded to honours students, and their numbers continue to grow steadily. ‘The University can be proud of this achievement. It fits our vision of education: education in an open research environment with students as active participants.’ In the Hooglandse Kerk, Bijl had a message for all students: ‘Help us make the world a better place. You have come into contact with other cultures and disciplines, and you have learned to solve complex problems together. Go and make a difference, during your studies and later in the world.’ 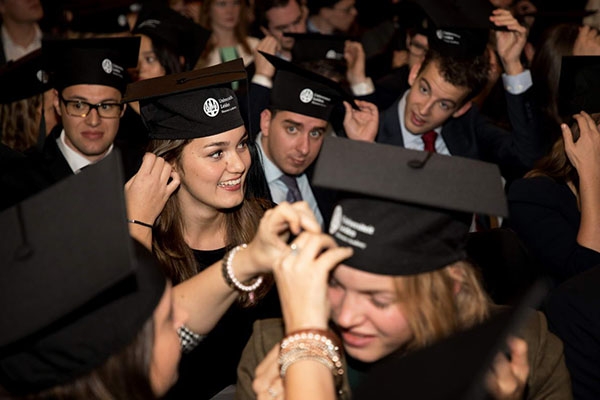 The University is more than happy to provide a stimulating environment. Marieke van Haaren, Honours Coordinator, praised the ambitious students. ‘Such stories just go to show that if you want to go the extra mile, you can.’ Honours Dean Ton van Haaften pointed to the role of lecturers. They too did their utmost to coach and stimulate the students.