For 16 years Elke Devroe is participating in this event where criminologists from all over Europe gather, meet, network, present their ongoing research to each other and let peer scholars evaluate theory, methods and results.  The main purpose of this conference is to provide updates on the current status of criminological research. This year’s conference was specifically interesting for scholars in police studies sharing insights around the wider impacts and implications of police models and systems and the emerging gaps between the expectations held by policy makers and practitioners and the current realities of policing in different communities.

Within the broader research framework of the “Policing European Metropolises Project” (PEMP), Devroe organized a theoretical and methodological panel to review draft texts of the book ‘Policing European metropolises. The politics of security in city-regions’  Devroe, Edwards and Ponsaers (Eds.) (Routledge, forthcoming in January 2017). The conceptual framework of PEMP is informed by Bourdieu’s (2004) concept of ‘semi-autonomous fields’ as a structured social space, with its own rules, schemes of dominance and legitimate opinions which are, in turn, ‘relatively autonomous’ of the broader social structure and by the urban regime theory (Stone, 1989).

Professor Jack Greene (Northeastern University, US) was invited for this panel and flew over from Boston to add to the theoretical underpinnings of the book  and Professor Gordon Hughes Cardiff university) commented on the methodological issues of this project. Central questions in this debate were: How to compare metropolitan policing across Europe? Is the urban regime theory an adequate theoretical framework for this kind of comparative criminology? Are governmental arrangements within different constitutional settings (common law, civil law) comparable, aiming at the understanding of new challenging plural policing practices? Is the diagnostic tool presented in the book to compare dispositions grasping all the variability between the multiple embedded case-studies.

In Devroe’s second panel ‘Convergence and divergence in policing agenda-setting in European metropolises’ results from the PEMP project were presented. The main research question ‘What processes of convergence and divergence exist in the policy formulation of policing strategies for European metropolises and how can these be explained?’ was answered in this panel. In the PEMP project embedded case studies were developed in 10 European countries, for a total of 22 metropolises. In this panel the results of 9 metropolises were presented, more particular in the countries France, The Netherlands, Germany and Belgium. The different agendas and strategies inhabit a multiplicity of internal security fields rather than a (singular) European internal security field, which encompass competing objects of ‘freedom, security and justice’. It is precisely in questioning how these are configured in particular metropolises but not others that explanatory theories about divergence and convergence in policing at the sub-national level in Europe can be built. This panel was again very interesting, and led to a lot of questions on the position of the Mayor in different metropolises, the special position of the public police within blurring boundaries of plural policing and the local agenda’s often (co) developed by nation states agendas. 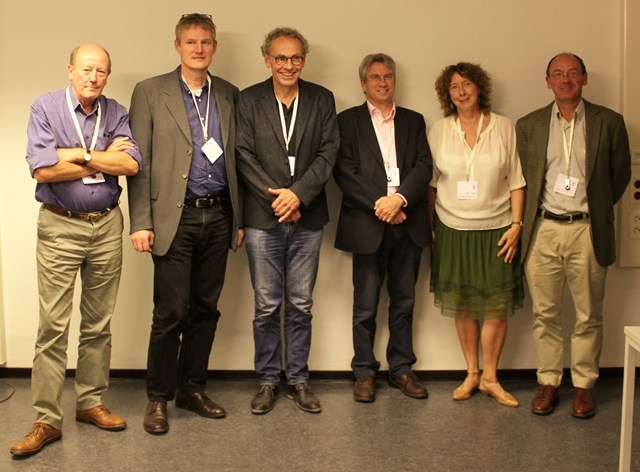 Now police and policing are more challenging after terrorist attacks in European countries, a very interesting panel on police reform was organized by Nick Fyfe and Jan Terpstra.

At the 2012 ESC in Vilnius a panel session on police reform was held exploring the different drivers and trajectories of large scale structural reforms to police organizations in many areas of Europe.  A book based on this session, Centralizing forces? (Fyfe, Terpstra and Tops) (Eds.)  was published in 2013, with a chapter on the re-organization of the Belgian Police by Paul Ponsaers and Elke Devroe.

The processes of police reform continue to play out in many European states, typically involving forms of increased centralization, and driven by a search for efficiency and effectiveness against a background of austerity, changing patterns of criminality and changing political circumstances.  Research into these processes is providing important insights into how reform is affecting a range of issues including local policing and community engagement, governance and accountability, workforce and leadership, and the provision of more specialist policing functions in areas like counter-terrorism and organized and trans-national crime.

In Devroe’s presentation “Policing and police in one hand: the necessity of one Brussels metropolitan police force” the actual debate on the re-organisation of the Brussels police force after the Paris terroristic attacks and the Brussels Airport and metro attacks was presented. With 19 Mayors steering 19 different Brussels Dutch-speaking and French-speaking municipalities that are divided in 6 local police ‘zones’ and not one overall director or Police Crime Commissioner, or, so to speak ‘a super Mayor for Brussel 19’ fragmentation, malfunctioning, limited information sharing and political conflicts became almost constitutive elements of this metropolises in this city-region. Some even blame the Belgian capital for negligence in this regard, keeping old structures alive and so creating safe havens and hiding places for radicalized youngsters, ex Syria fighters and hard core terrorists (from Belgium or France). In this lecture I explored the recent Bill on restructuring Brussels police force into one unified police system, and combined pros and cons from an academic perspective (urban regime analysis and governance studies) and from a political and practical angle. What exactly is this police re-organisation (coming from Flanders) Bill about? Why do French political parties refuse? What are French Brussels liberals and socialist divided about? The title refers to the statement that, like in other EU metropolises, Brussels capital not only needs one Community Oriented Policing police service, but more needed is the municipal leadership in one hand, combining as well Brussels 19 as all other policing issues, so that social care, prevention and law enforcement are just building blocks of one integral (security) policy. See the example of Berlin and London in the special issue on ‘Policing European metropolises’ of the European Journal on Policing Studies and the special issue Devroe and Terpstra elaborated on plural policing.

We are already looking forward to it! 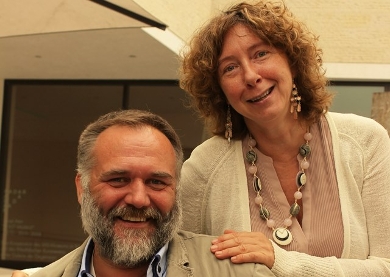 Elke Devroe with Gorazd Mesko,  the next president