Aja Huang: 'The power of AlphaGo is in the use of neural networks'

How did Google's computer programme AlphaGo become so powerful? On June 29, developer Aja Huang elaborated on this during a lecture in the Gorlaeus building.

Earlier this year, AlphaGo surprised everyone by defeating the world champion in the extremely intricate board game Go. The victory is regarded a majour step forward in the development of Artificial Intelligence. Aja Huang, one of the main developers of the programme, gave a lecture last Wednesday during the ICGA Computers and Games Conference in Leiden.

‘I am honoured to be here, I have learned a lot in this community,’ Huang began his lecture to an audience of experts and enthusiasts in the field of computer games. Huang is no stranger in this field. Already ten years ago he participated in the annual Computer Olympiad, in which players make their own computer programmes compete against each other in games like Go and backgammon. He then participated with his first Go program: AjaGo. He did not get very far in the competition, says Huang, but his participation inspired him to develop a much more powerful programme. 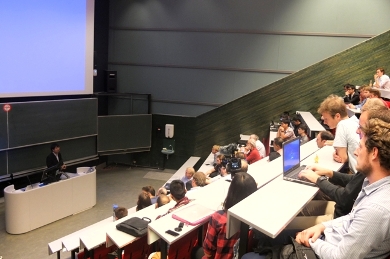 Ten years later, the time has come: together with his colleagues at Google DeepMind, Huang has developed AlphaGo, which defeated world champion Lee Sedol in March 2016. How did they manage that? The strength of the program, Huang says, stems from the use of neural networks, also called deep learning. This way, the programme can evaluate the positions on the board and determine next steps.

But that alone is not enough, says Huang: these networks are very powerful, but they need a lot of training too. This was done with a new combination of methods, in which the computer learned in different ways: by analysing 30 million games from human Go players, and by playing against itself millions of times. The fact that the programme was developed under the umbrella of Google - where resources and opportunities are unlimited - did help, says Huang. Yet he himself is impressed by how strong AlphaGo has become.

Huang also discusses his motivation, which started with love for the game Go. ‘People love games. But at DeepMind there is also another aspect to the research that we do: we want to make the world a better place. These techniques in the field of artificial intelligence can be applied in many other areas, and help us solve all kinds of practical problems. We are now developing a medical programme, for instance.’

Aja Huang’s lecture was part of the annual Computers and Games Conference, which takes place at the Leiden Institute of Advanced Computer Science (LIACS) this year. During this conference, researchers from around the world present the latest results of their research on computer games. In addition, related events are taking place, such as the World Computer Chess Championship and the Computer Olympiad.

A video registration of the lecture is available on the conference website.