The association agreement with Ukraine: road to conflict or cooperation?

Will the association agreement between the EU and Ukraine lead to a new ‘Cold War’ between Russia and the West? That was one of the questions posed to the expert panel which discussed the referendum on the EU-Ukraine association agreement. While many people are still unsure what this referendum is really about, expert opinion also proved to be divided with Dr. Hans Oversloot being weary of the consequences of the deal, while Dr. Antoaneta Dimitrova was more optimistic about its effects.

In his introduction, Dr. Hans Oversloot (Institute of Political Science) focused on the geopolitical history of Ukraine. The country of 44 million has never existed in its current form before the early 1990s. The ties with Russia are particularly clear in the case of Crimea, which had always been a part of Russia until it was ‘gifted’ to the USSR state of Ukraine in 1954. More recently, Russia sees European involvement in Ukraine as an attempt to block the development of its own free trade area, from which Ukraine has profited greatly in the last 20 years.

Responding to questions from the audience, Dr. Oversloot was quite pessimistic about the effects of the treaty: he argued that Ukrainian politics showed a very high degree of corruption, which made it likely that the treaty would mainly benefit vested interests in Ukraine. 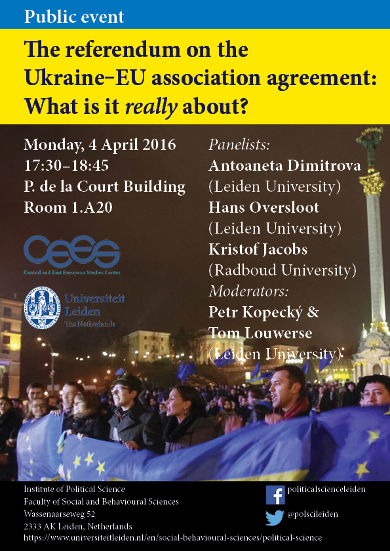 The contribution of Dr. Antoaneta Dimitrova (Institute of Public Administration) was aimed at understanding what the association agreement actually says and how it would impact the position of Ukraine. The treaty is more encompassing than many other association treaties as it involves a Deep and Comprehensive Free Trade Area as well as commitments to political cooperation. As a result, the treaty involves both the EU as an actor, because of its competences regarding international trade, as well as the individual EU Member States. Nobody, however, knows exactly which part of the treaty is connected to who’s competences.

Dr. Dimitrova pointed out that many of the clauses in the treaty are conditional: if the Ukraine changes or reforms certain things, more parts of the treaty will become effective. So if Ukraine really takes up this challenge, the treaty might greatly and positively affect Ukrainian society. On the other hand, this might also threaten major interests (oligarchs) who might oppose such reform taking effect.

‘Referendum will not change much’

While the consequences of the treaty itself might be unclear at this point, the referendum offers a further complication: how will this affect national and international decision-making? Dr. Kristof Jacobs (Radboud University) focused on the referendum campaigns currently taking place. Some parties are rather active on the no (SP) and yes (D66) side, while others are barely campaigning at all. These campaigns face different challenges. From the international literature on referendum campaigns, we know that yes campaigns are usually most successful when they focus on mobilizing their supporters. This is, however, more complicated in the current referendum, as some proponents of the agreement might want to stay at home so that turnout does not achieve the 30% threshold required. Dr. Jacobs argued that this would be a poor strategy for yes voters. Using simulations he demonstrated that for every 1% decline in turnout, there would be approximately a 2% increase of the share of the no vote. His advice was therefore to ignore the threshold.

Dr. Jacobs argued that the effects of the referendum might not be very large: most likely a no-vote would result only in minor changes to the agreement, which is also what some detractors of the agreement are expecting.