Bachelor student Vera de Regt received the first prize in the Anthropology Photo Contest 'Street Life' with her photo 'Girlpower in USA river' of Tanzanian boys ánd girls passionately playing football together. On the festive award ceremony at the Faculty of Social and Behavioural Sciences, after a brief keynote by Zoë van de Kerkhof, the photos for the new exposition were revealed and the 2nd and 3rd prizes were handed out to Jule Forth and Faye Han.

Very surprised Vera de Regt came to collect her award, after seeing her photo held up at the the 1st prize announcement. "I saw all these beautiful pictures announced one by one for the exposition. I was a little intimidated by them, so I never expected I would be the one to win!" Jury foreman Dr. Mark Westmoreland says the jury was very impressed with how the photo she took in Tanzania expertly captures a spontaneous moment of street life among children playing football on the unpaved roads of a rural Eastern African landscape.

"A girl entering the frame is aiming to kick a football seems to invite us into the image and points to another child trying to snatch the ball away. Another is jumping and behind her perhaps a crying child. This image is abuzz with activity across multiple layers of involvement. The intimacy between the photographer and those imaged is revealed in the caption, but it can also be felt in the closeness and ease of which the moment was captured. We also liked this image for its optimism and gesture towards women’s empowerment."

#2 Jule Forth: Unusual lines of stillness

Second place was awarded to 'Sleeping passengers at New Delhi Railway Station' by Master student and staff member Jule Forth. "We were particularly impressed with the uniqueness of this image. Perhaps not exactly a street, only a platform, the photograph from India nevertheless captures a distinct moment of vulnerability in an urban public setting. Caught unaware, we see these people in a state of limbo, waiting up to 15 hours for a delayed train. Their bodies reveal gendered patterns, unusual lines of stillness, social aesthetics of color and texture. The others seem to be suspended from the top of the frame, the space and time of waiting also gives over to the dreamy qualities of sleep. Except for a young child sitting between a woman and man, as if it melts into the patterned cloth, camouflaged in his attentive awakened state."

Third place was left for Bachelor student Faye Han with the photo 'Offshore', an image of an illegal dealing of hashish at a bus stop in Den Haag, The Netherlands. "This was probably the most unique composition of all the submissions, choosing a tight frame that retains both the anonymity of the subject as well as a sense of mystery and suspense that happens on the urban street. The illegality in close up becomes a site of tension, we don’t know who or what lingers out of the frame. But then this also shows an intimacy between the photographer and the subject photographed, an ease with being imaged in a risky activity. The soft focus around the edges helps train the eye on the dealer’s hands and corporeal presence. As the flame wraps around the edge of the hashish, to help soften and break some free, the simplicity of the elements points to a larger pattern of street life otherwise hidden from view."

New exposition and a vibrant #4

The Anthropology Photo Contest is a yearly event organised by the Institute of Cultural Anthropology and Development Sociology and student society Itiwana. Every year a selection of the submissions is shown in the exposition in the Institute's hallway on the 3rd floor. In this year's 'Street Life: Het leven van de straat' edition 13 other photos are included, next to the prize winners.  The photo 'Werkzaam' by Master student Mara Lin Visser of fishermen in Accra, Ghana, even received an honorable mention by the jury. Although she did not reach the top-3, the photographer was praised. "Taking a centered position, she shows comfort and confidence in the setting, choosing a composition that captures a vibrant moment of activity. Patience looking at this photo reveals multiple layers of people, objects, and scenery."

Anthroplogist, alumna, social studies teacher, and photographer; keynote speaker Zoë van de Kerkhof blended all in one during her brief talk on street photography. Jury foreman Mark Westmoreland would later emphasise the importance in anthropological perspective on the ethnographic rapport between photographer and photographed in our effort to account of image ethics. Yet, NRC Photo Prize winner Zoë revealed how different strategies can be for a more artistic street photographer. She explained how difficult it is to capture the vulnerability and loneliness of an image created in an artist's mind, once you first have to ask permission for a photo. Showing examples from her previous expositions, she discussed privacy and intimacy and the challenges and boundaries of creating one's own images. Her talk showed all the more, how diverse the field of photography is and especially the theme as street life can show every day life as an interesting playground for both photographers and anthropologists. 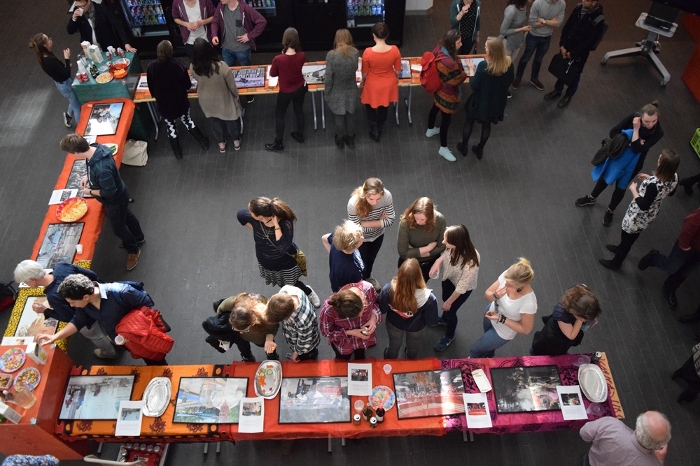