During his visit on 12 April 2016, Dr. Jatna Supriatna was appointed as visiting scholar at the Faculty of Science of the Universiteit Leiden. Dr. Supriatna is a biologist, and is a senior lecturer at Universitas Indonesia’s Department of Biology. His appointment was made in the context of increasing cooperation between the science faculties of Universitas Indonesia and the Universiteit Leiden. As visiting scholar, Dr. Supriatna will be shaping the cooperation projects. 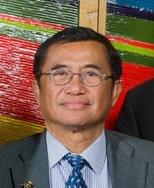 Dr. Supriatna is widely recognized and respected for his work in nature conservation. He is currently chairman of the United Nations Sustainable Development Solutions Network for Indonesia, as well as co-chair for this network in South East Asia. He directed the Indonesian chapter of Conservation International between 1994 and 2011, and was active in many other nature conservation initiatives. Thomas Friedman, a well-known journalist, once portrayed him as ‘the Noah of Modern History’. Prince Bernhard of the Netherlands appointed him as Officer of the most Excellence Order of Golden Ark  in 1999.

His scientific work focused on biodiversity, and he discovered a number of new species, mostly primates, in Indonesia. His colleagues honored his work by naming a new species after him, the flying lizard found at Togean Island: ‘Draco Supriatnai’. Dr. Supriatna also published on the interplay between tourism and biodiversity. Since 2011 Dr. Supriatna is a member of the Indonesian Academy of Science, as well as chairman of the Research Center for Climate Change (RCCC) at Universitas Indonesia. He is also a member of the Board of Trustees of UI.

The collaboration with Dr. Supraitna and his team will mostly be undertaken by biologists and environmental scientists within the Faculty of Science of the Universiteit Leiden.