The financial system needs complexity theory to predict economic crises like the 2008 meltdown. An international team of scientists, including Leiden physicist Diego Garlaschelli, state this in a paper published in Science on February 19th.

Traditional economic theory has proven to fail in explaining, let alone predicting the 2008 financial crisis. Complex models used to study ecological systems and the spread of diseases are indispensable for a stable banking system, according to scientists from the University of Amsterdam, Wageningen UR, Utrecht University, Leiden University, University of Groningen, Oxford University, ETH Zürich, Santa Fe Institute, Bank of England and the Global Climate Forum.

Most crises are not caused by sudden events, but by slow dormant processes. With complexity theory, scientists could identify these and use them to predict and prevent economic collapses. Earlier research from Garlaschelli, in collaboration with De Nederlandsche Bank, shows that the 2008 crisis came as a surprise to traditional models, but a more realistic model accounting for different bank sizes could have predicted it three years in advance.

Statistical physicists, ecologists and epidemiologists have tools to analyze the stability, robustness and resilience of extremely complex natural systems that have large numbers of actors. They identify interactions, measure their strength and study how chains of events propagate. The banking system is just as convoluted, calling for banks to be considered as individually different nodes in a large network. Some banks have for example a more central role than others, meaning the system’s stability depends more on them. Another hazard is information asymmetry, where banks are unaware of other banks’ issues. ‘Even central banks don’t have complete information about the system’, says Garlaschelli. ‘My research also focusses on the optimal reconstruction of financial networks from partial information.’

The key for a good warning system is to notice a so-called tipping point well in advance. Social experiments have shown that economic systems tend to have cascade effects leading to extremes like real-estate bubbles and stock market crashes. Eventually this leads to a tipping point, after which a crisis is inevitable. On the contrary, in order for a system to be healthy, it should have mechanisms restoring equilibrium. Garlaschelli: ‘Recent experiments in Cars Hommes’ group in Amsterdam have shown that enabling such stabilizing mechanisms is indeed possible in real economic systems.’

The authors conclude that funding required for a warning system based on complexity theory stands in no comparison to the cost of an economic crash. 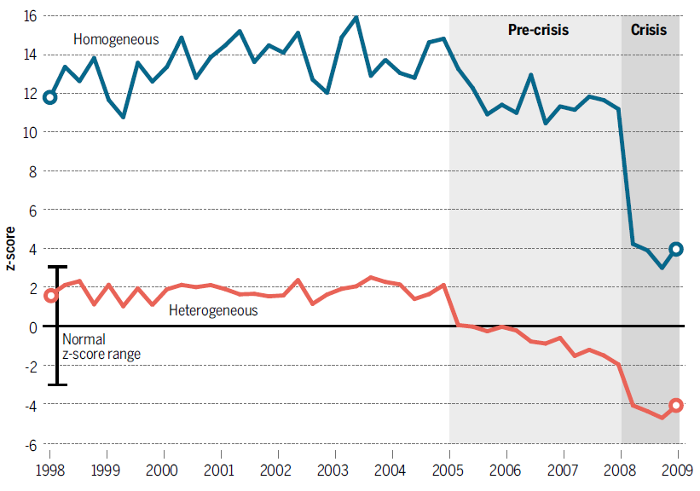