Very few treaties that are negotiated by the EU, have triggered such resistance as the Transatlantic Trade and Investment Partnership (TTIP). From chlorinated chicken to a lack of democracy and transparency: emotions on TTIP run high. For that reason, the conference “TTIP: an EU perspective on global economic governance” was organized at the Leiden University College in The Hague on 4 and 5 December.

At the conference, the attempts to reach an all-encompassing trade deal between the US and the EU were subjected to academic scrutiny from a European point of view.

The conference was opened by the Permanent Representative of the European Commission in the Netherlands, Dr. Peter Bekx. He emphasized that trade policy is not only about interests, but also about values. In the following two days, more than 100 participants listened to the contributions of academics and practitioners from different countries giving their view on the (im)possibilities of the trade deal, pressing questions and most controversial topics under discussion. Via Twitter (#TTIPLEIDEN2015) the debate continued online. 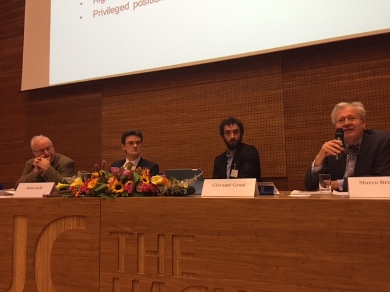 The conference was the result of a collaboration between the Europa Institute and the Leiden University College Research Centre and was made possible with a conference organization grant from the Leids Universitair Fonds/Slingelands.