Fishing for neutrinos in the Mediterranean Sea

Physicists, including Dorothea Samtleben from Leiden University, are building a giant underwater telescope to unravel the origin of neutrinos and to solve the mystery surrounding dark matter. The first detector has now been installed. Once it is finished, the telescope will be three cubic kilometres in volume.

The KM3NeT neutrino telescope uses water from the Mediterranean Sea to capture the tiny particles it is trying to detect. The three cubic kilometres of sea water that make up the telescope are needed because neutrinos are the most elusive of all elementary particles. They can only be detected if they happen to interact with another particle, and the likelihood of that happening is very slight. But the constant torrent of neutrinos that passes through everything and everyone every second, in combination with the enormous volume of water, increases the likelihood of these particles being detected with the KM3NeT. 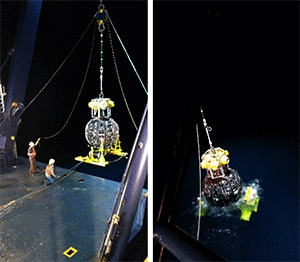 The telescope will consist of a network of hundreds of vertical filaments that are anchored in the seabed and held taut with underwater buoys. Each filament has 18 light sensors. In the darkness of the deep sea, the sensors register weak signals of  Cherenkov radiation that neutrinos produce when they interact with the sea water within the telescope. A 100-km long cable connects KM3NeT with a station on land in Portopalo di Capo Passero in southern Sicily. The Leiden Institute of Physics has played a prominent role in analysing the data from smaller prototypes and testing the present detector.

‘KM3NeT is opening up a new era in the study of neutrinos,' Samtleben commented.  ‘It is larger than any previous telescopes and has an unprecedentedly high resolution for detecting the direction of the neutrinos. It gives us a lot of information that we can use in our research. We want to know where cosmic rays come from, understand the nature of neutrinos and make a contribution to resolving the mystery of dark matter.' Research on fundamental questions as these always has side-effects; in this case the researchers needed to develop highly sensitive light sensors and underwater technology.

The telescope is expected to be operational for ten years. The first 30 detectors should be installed within two years. After that, and with additional funding, there will be a total of 600, so that the researchers can make full use of KM3NeT's capabilities. Samtleben: ‘But we're receiving data even now. We followed the developments the whole day via a live feed; it was a tense time. And then, in the evening, we saw the first data come in. As soon as we saw that happening, we knew that the installation was a success. The next day we celebrated it at Nikhef (Institute for Subatomic Physics), where we had built a big part of the detector unit.'

Header image: A building block of the KM3NeT consists of 115 detector filaments; the complete telescope has several building blocks with a total of several hundreds of filaments. They are kept stretched taut between the seabed and underwater buoys. (Credit: Marc de Boer/Ori Ginale)

Leiden physicist Dorothea Samtleben is working on the project. ‘KM3NeT is opening up a new era in neutrino research.'