The Hague Project Peace & Justice, in cooperation with Dr. Alanna O’Malley of the Leiden University Institute for History, organized a one-day conference on October 23rd, to celebrate the 70th anniversary of the United Nations. Students of the ‘A History of the United Nations’ elective course of the MA International Studies participated in an essay contest for this conference, and were amongst the selected few to present their work to experts during the discussions.

The event took off in the Humanity House in The Hague. The goal of the conference was to produce a The Hague Manifesto, to accompany the new UN Sustainable Development Goals (SDGs). The Hague being dubbed as ‘the city of justice’, the main focus was on Goal #16: ‘to promote peaceful and inclusive societies for sustainable development, provide access to justice for all and build effective accountable and inclusive institutions at all levels’.

Four different working groups, each centring on a specific topics of law and justice, cyber-governance, peacebuilding architecture and climate change, started to develop suggestions for the UN to make the Sustainable Development Project a success. The discussions took place in an informal setting and were kicked off by the student presentations, after which suggestions and additional content were added by the other attendants. Amongst those present were experts from a wide array of expertise: representatives from the UN, the Ministry of Foreign Affairs, NGOs, professors and lawyers. 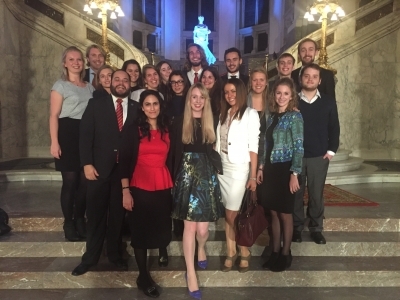 It was a great experience for the students to be able to converse with these professionals as equals, discussing the future of the UN, receiving feedback and support for their work and hearing stories from the field. After the working group phase, the suggestions each group came up with were combined into the Hague Manifesto, which was then presented to the press. Meanwhile, students could network with the other participants, exchanging ideas and reviewing the progress that was made.

By the end of the afternoon the students departed to the Peace Palace to attend a festive ceremony. There the Manifesto was presented by several fellow students to the ambassadors of foreign diplomatic missions that are stationed in the city. After that the students celebrated the 70 th anniversary of the founding of the United Nations.

The most interesting thing about the conference was to be able to participate in such an important event and to be taken seriously by well-established experts in that regard. This opportunity has left the students with valuable lessons for the future and a memory they won’t forget soon. The students feel like they had learned a lot from the experience and had been able to make a valuable contribution to the result.

The story of the Hague Manifesto does not come and end here however. The document will be followed by other publications concerning actions to accompany the recommendations that were made to the UN and the organizers of the event have asked student input for these too. The students are eager to keep working on this project and are looking forward to the impact it may have!