Itandehui Jansen graduated from the Netherlands Film and Television Academy in Amsterdam and is currently making films as part of her PhD project at Leiden University. And with great success. Her films have been shown at the IDFA and the Short Film Corner of Cannes, and have won a number of prizes. She was recently awarded the first prize at the Bluestocking Film Series festival in Portland for her film Alma y Esperanza.

What’s it like as a filmmaker to have your work appear at a world-famous festival like Cannes? 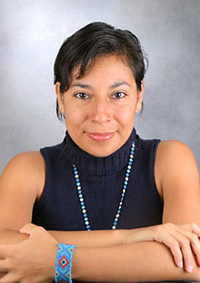 “Festivals are always a lot of fun, because they are an opportunity to really show your work. As a filmmaker I find it important to see how the audience responds to my films. Are they laughing when they should be, for example? And to see whether people are moved by my film. I learn a lot from it.”

What is the project you are most proud of?

“I think that Alma y Esperanza [prize-winning film of the Bluestocking Festival - ed.] was my most interesting project. The film is about a girl, Alma, who lives in the US, but after the death of her mother she moves to a small indigenous Mexican village where her grand-mother lives. The film's production had a slow start. It is a very independent film, more a no-budget than a low-budget movie. I made it myself with very little money and friends of mine edited it. In the end, it was shown at more than fifteen festivals and ended up winning two prizes. After such a modest beginning I find that really remarkable. Alma y Esperanza is also the movie that people tell me touched them most.”

Both Alma y Esperanza and your previous film El Último Consejo deal with the problems facing indigenous communities in Latin America. Why is this topic interesting to you?

“For my PhD I do research on indigenous cinema, in particular the way in which marginalised groups represent themselves in film. I also make films that deal with the problems facing indigenous communities. I was born in Mexico, which is certainly part of the reason for my interest in this topic. But I would say that my work is really about fragmentation. I have roots in Mexico but I live in the Netherlands. Alma y Esperanza is also about the fragmentation between two cultures, American and Mexican.”

What are you trying to bring across with your films?

“I don’t necessarily want to bring a certain message across in my films. What I want to bring across is a feeling. Film is a form of art so I try to use this medium to give people something to think about. In my films, I treat political themes: for example my film El Último Consejo deals with corruption in Mexico, but I never try to give the viewer a streamlined message. With El Último Consejo I am not trying to say: ‘corruption is bad’, but I am inviting people to ask themselves: what do I think about what is happening here?”

Itandehui Jansen made these films as part of her PhD project.

Itandehui Jansen is defending her thesis on 7 October at the Leiden Academy for Creative and Performing Arts. As part of her defence, a number of her films will be shown at the Museum of Ethnology on 6 October.