Every month a member of the Institute for History tells about a book that inspired him or her. Afterwards, the pen is passed on to another colleague. This month dr. Robert Stein tells about the book 'La Vérité sur l'affaire Harry Quebert' by Swiss writer Joel Dicker. It is not so much the whodunit that makes La Vérité a book worth reading for an academic public. It is the relation between the unselfish master and his pupil, and especially the struggle how to find focus in order to write a book. 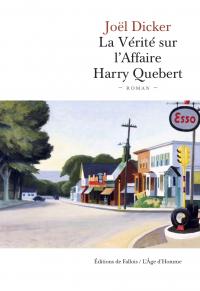 In 2012, the young Swiss writer Joel Dicker wrote La Vérité sur l'affaire Harry Quebert (in English translation: The Truth About the Harry Quebert Affair). In France the book was a hit. It received the Grand prix du roman de l'Académie française et le prix Goncourt des lycéens, selling more then one million copies. In the Netherlands, where its translation appeared in 2014, it got a less favourable reception, NRC-reviewer Margot Dijkgraaf only gave it three stars (out of five).

At face value, la Vérité is an ordinary thriller. The young and ambitious writer Marcus Goldman returns to his old master, the famous author Harry Quebert, who lives in a secluded villa on the coast of New Hampshire. Then the skeleton of the 15-year-old Nora Kellergan, who went missing some thirty years before, is found underneath Quebert’s flowerbed, along with the manuscript of his first novel. Quebert becomes the prime suspect in an old murder-case. Thus La Vérité unfolds into a traditional whodunit, holding more than 600 pages. According to the conventions of the genre, the narrative thread takes many turns, some of them quite unlikely. As such, it is a thrilling but only partly convincing, story.

However, La Vérité sur l'affaire Harry Quebert is far more than just another detective. Apart from the obvious question who killed the young schoolgirl, it addresses two narrative lines. One is the development of a friendship between the settled author Harry Quebert and his pupil, the narcissistic Marcus Goldman who started his career as a writer just a few years before. Quebert acts as Goldman’s unselfish counsellor, supporting and confirming his young friend. Every one of the 31 chapters starts with one of his good councils: how to start a book, how to write a second chapter, how to be a writer, how to deal with your ideas and your audience. Goldman’s approach to his friend and teacher is far more ambivalent. As a classical tragedy the book shows the complex relation between the old master, now past his prime, and the up and coming talent.

The second – or better third – narrative of La Vérité is the genesis of a book. Having published a well-received novel a few years before, Marcus Goldman has promised to complete a new book shortly. Haunted by his shady publisher, he suffers from a severe writer’s block. He is afraid he can’t come up to the public’s expectations, doesn’t know how to start, or what to write about, and time and again he seeks excuses to postpone writing. When it becomes clear that Harry Quebert has secrets to hide in relation to the murder-case, Goldman has found his focus. In the last chapters the three narrative threads intermingle.

It is not so much the whodunit that makes La Vérité a book worth reading for an academic public. It is the relation between the unselfish master and his pupil, and especially the struggle how to find focus in order to write a book. In the end it illustrates the last of Quebert’s advices: A good book is a book you were sorry to have finished.

I pass the pen for the next book recommendation to dr. Alicia Schrikker.