A musical celebration of the 440th dies natalis

On the occasion of the 440th DIES NATALIS, celebrated on Monday 9 February, Leiden University proudly awarded an Honorary Doctorate to William Christie, renowned harpsichordist, conductor, musicologist and teacher, and the foremost pioneer in the renewed appreciation of Baroque music in France, notably from the 17th and 18th centuries. 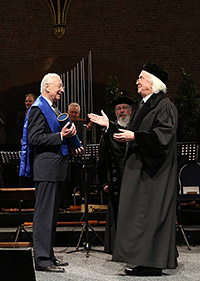 The Leiden University Academy of Creative and Performing Arts is honoured to have been allowed by the Raad van Decanen to be one of the Leiden University Institutes that proudly proposed an Honorary Doctorate on the 440 th DIES NATALIS, the past 9 February. The title was conferred upon William Christie, great harpsichordist, musicologist, conductor and teacher who managed to reach and touch a large audience through his renewed interpretation and performing practice of French Baroque music from the 17 th and 18 th centuries. William Christie is artistic director and founder of the baroque music ensemble Les Arts Florissants and leader of the "académie" for young singers Le Jardin des Voix.

Prof. Frans de Ruiter, director of the Academy of Creative and Performing Arts and appointed Honorary Supervisor, conducted an interview with William Christie in the morning prior to the celebration of the dies natalis.

An audio registration of this interview can be heard through this link, together with a series of pictures of this event:

For the Academy of Creative and Performing Arts, the celebration of the 440 th dies natalis proved to be a special day; not just a meeting of the arts and sciences characterized the ceremony, but a mergence.

‘We need art and culture, reckless unconventional thinkers and artists. We need the utopias they design, the imagination that drives them, their desire for a better world. They are the thorn in the flesh of our society that prevents our democracy from succumbing to our intellectual laziness and political complacency’. Germany’s Minister for Culture Monika Grütters’ words, spoken in Latin during one of the outstanding and innovative performances by the Academy of Creative and Performing Arts and De Veenfabriek, were more applicable than ever on this memorable day.

Throughout the entire ceremony, words and music lifted each other up through the alternation between the speeches by the Honorary Doctors and prize winners, and performances by the Academy of Creative and Performing Arts and De Veenfabriek. These performances consisted of a combination of chant, speech and the sounds of extraordinary instruments such as the düraluphone, the siren and intonas. This dazzling music and the purity of the Gregorian plainchant that uplifted the ceremony so beautifully contributed to a day that will be remembered for a long time. 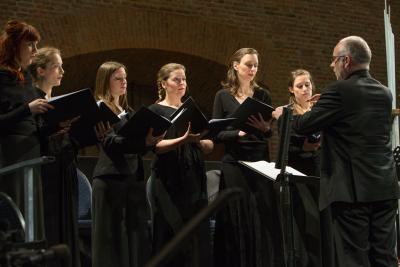 Together with the bestowal of Dr. h.c. William Christie, honorary doctorates were conferred on Lilian Gonçalves-Ho Kang You for her ‘exemplary career in the heart of the constitutional state’ and women’s rights in particular, and on Professor Peter J. Katzenstein for his great achievements in the field of comparative politics and international relations. His words of thanks were marked by the emphasis on the importance of freedom of speech, especially today.

In her dies lecture, Hanna Swaab, Professor of Neuropedagogical Assessment and Developmental Disorders and Dean of the Faculty of Social and Behavioural Sciences, placed great emphasis on the importance of thorough research and correct diagnostics for children with behavioural problems in order to give them the right treatment.

The Leiden Teaching Prize 2015 was awarded to Harmen Jousma, Science Based Business teacher. Sophie Starrenburg, Public International Law student, presented her award-winning thesis research on cultural genocide, pleading that the penalization of it is necessary in order to protect our cultural heritage in times of both peace and war.