Pieter Houten is a PhD student in the ERC granted research project 'An Empire of 2000 Cities: urban networks and economic integration in the Roman empire', directed by Luuk De Ligt and John Bintliff (Archaeology). 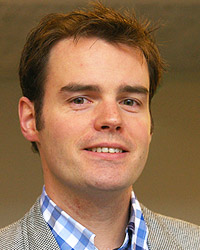 Born in the Limburgian village of Gronsveld in 1984, I grew up in the vicinity of Maastricht. After my secondary school, I left Limburg for my studies in Utrecht. The University of Utrecht offered me the possibility to do a BA in History with a minor in Ancient Culture. As I am interested in ancient history and research, the research master Ancient, Medieval and Renaissance Studies at Utrecht was the most logical way to continue, of course within the track Ancient Studies. For my MA thesis I studied the urbanization of Celtiberia, a region in the heart of Spain.

My interest in Spain was kindled by my fiancée, who did a BA in Spanish Language and Culture, which resulted in many of our holidays being spent in Spain. In visiting the archaeological museums there I was intrigued by the large variation in material culture in Spain and by the complex history of the Iberian Peninsula, where the Celtic, Iberian, Greek, Punic and Roman cultures met. The love for Spain grew during our stay in Madrid in 2012. During this period my fiancée did an internship as part of her MA in Intercultural Communication, whilst I spent a semester at the Universidad Complutense de Madrid at the faculties Ciencias Políticas y Sociología and Geografía e Historia.

During my studies at Universidad Complutense de Madrid, I got the opportunity to study with Prof. M. Almagro-Gorbea, an expert on the urbanization of the Iberian Peninsula. Furthermore, I took my first steps studying anthropology and archaeology. The time in Spain was used to the fullest extent as I was also able to visit several of the Celtiberian archaeological sites with the Philologisch Studiefonds travel grant. This grant created the opportunity to see sites such as Numantia (besieged by Scipio Africanus the Younger in 133 BCE), Segobriga, Clunia and Bilbilis, and several others. Especially after this experience I believe visiting your area of research is the best way to really get to know what you are talking about.

After my research MA I was very keen to continue to do research on urbanization and urbanism in Roman Hispania, and University of Leiden has been very kind in offering me the chance to do this as a PhD student in the ERC-project “An Empire of 2000 Cities: urban networks and economic integration in the Roman Empire”. Within this project I will focus, indeed, on Hispania.