Paul Kloeg is a PhD student in the ERC granted research project 'An Empire of 2000 Cities: urban networks and economic integration in the Roman empire', directed by Luuk De Ligt and John Bintliff (Archaeology). 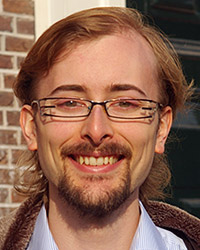 I was born and raised in a village near Delft. As half-Dutch, half-Portuguese, I’ve always had part of my focus beyond the borders, even while remaining rather rooted in the south of Holland. While it may be slightly out of fashion nowadays, I do tend to identify myself more as a European than a true Dutchman. Beyond that, I believe that a person is best defined by what he enjoys. For me, life’s all about good food, books, music and games, but above all, good company.

My path towards history has not always been very clear. In high school (at Gymnasium Haganum, and the final year at Luzac College), my focus lay with natural sciences and languages. Upon completing that I made a short attempt to study Aerospace Engineering in Delft. While highly enjoyable, I’m afraid that to me this was, well, rocket science. So, after some soul-searching, I did discern a trend within my interests, that I particularly like old things or subjects (admittedly, this mostly works for books, games and music, but when it comes to food it’s mostly limited to cheese). So, in 2009 I started my studies in history here in Leiden.

Although narrowing down my interests to a single field proved to be quite a challenge, in the end I did end up writing about Ancient urban history for my BA and MA theses. The former treated Puteoli and Ostia, the latter was on the population of Antioch in the second century. Especially with my MA, my focus started to shift to the east of the Empire, and as such I’m now looking at the urban networks of the Roman Near East. Besides studying, I also spent two years at Leidschrift, our local student-edited journal, which I can heartily suggest to all of you. And of course, do mention it to your students; at least personally I found working there a good exercise in critically analyzing texts.

The opportunity to join Prof. De Ligt’s project, with its subject so close to my research interests, was one I did not want to miss. And indeed, working here has already proven itself to be a great experience. The team is wonderful, and the work is fun. And of course, with our own coffee table, bookcases filling up and maps of our regions (and some quotes from Horace) on the walls, our small history enclave in De Vrieshof 3 is feeling more and more like home.