Edgar Pereira is one of the four PhDs in Cátia Antunes’ ERC Research Project 'Fighting Monopolies'. 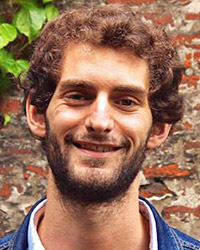 I was born in Lisbon and I did my undergraduate in History at New University of Lisbon in the Faculty of Human and Social Sciences. During the first year of my Masters I was selected to join the ranks of the project Lands Over Seas: Property Rights in the Early Modern Portuguese Empire (LAOS). I became part of a research team that was composed of researchers from Portugal and Brazil whose area of interest is the problem of appropriation, (re)distribution and control of land in an Empire that is mainly recognized as maritime and commercial in configuration.

My M.A. dissertation dealt with the redistribution of the estates and other landed resources that the Society of Jesus owned in the territories of the capital of the Portuguese Empire in Asia, Goa. I analyzed the political decisions taken by the state regarding the administration and application of those economic resources that had been confiscated in the aftermath of the expulsion of the Jesuits by the Portuguese crown in 1759. Secondly, I highlighted the participation of the social groups that took part in the process of redistribution of the religious order’s patrimony: how they were favored or ignored by the state, and how they made the best out of the opportunities that came with the endowment of these properties.

I am currently doing my PhD as a team-member of Cátia Antunes’ project “Fighting Monopolies. Defying Empires”. The main scope of this project is to analyze the construction and evolution of the European Overseas Empires of the Early Modern Age and also the Ottoman Empire, not from the traditional point of view of the state-central administrative apparatus, but through the perspective of free agents and the networks of entrepreneurship. During the course of my research I will apply this theoretical viewpoint to the study of the Iberian empires (Portugal and Spain).

Being a part of this project is a great opportunity at several levels. It allows me, not only, to once again study abroad (I had done an Erasmus semester in Paris when I was finishing my BA, which was a fantastic experience), but also to do research in a very prestigious academic institution, with an increasing degree of demand and complexity, and particularly  in a field of study I can deeply relate to.

I have always been interested in informal and non-centralized ways of empire building that took into consideration the role played by mercantile networks, renegades, smugglers, missionaries, pirates, etc. in the expansion of European presence and influence to different oceans and continents. I am, therefore, extremely motivated to work on this project and on my PhD dissertation for the next four years.