Jan Zaanen, Professor in Theoretical Physics of condensed material, has been awarded a Spinoza prize. His pioneering ideas about the collective behaviour of quantum particles and high temperature superconductivity have often given him the reputation of being something of a rebel.

Sociologist of the quantum world 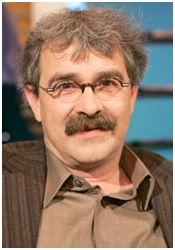 Jan Zaanen: 'The real work takes place in the lab.  If you haven't got any results within ten years, you should drop your theory.  Otherwise it becomes a religion.'

'A theoretical physicist can do an awful lot with a million and a half euro,' says Zaanen. Getting researchers from Stanford, his Mecca, to come to Leiden, for example. Or clever Chinese scientists like the ones he met when he was on sabbatical there. He is proud of the state of physics in the Netherlands. 'Seen from America, physics in the Netherlands lights up the whole of Europe. And Leiden physicists are fantastic.'

'Collective quantum physics could be much better organised than has been the case to date,' says Zaanen. 'We have a reasonable understanding of the psychology of quantum particles. But now we have to try to deduce the organisational principles of their sociology. Which seems to be a difficult challenge, and we still have long way to go.'

His specialist area is a permanent challenge for experimental physicists, and is notorioiusly difficult to explain to the layman. 'I'm not yet able to do this for readers of Nature,' says Zaanen who, as guest writer for this journal, is well qualified to explain the newest milestones.

Zaanen's fascination with collective quantum physics, the major issue in present-day fundamental physics, started in 1986. In that year it appeared that superconductivity - current without resistance - can also occur at higher temperatures than just above absolute zero. Low temperature conductivity was discovered in 1911 by Kamerlingh Onnes, and in 1957 a quantum theory was developed which was able to explain this phenomenon. Since then, physicists have tried theit utmost to raise the temperature to a point where cooling with liquid nitrogen is possible, instead of with expensive helium.

In 1986 it suddenly worked, which resulted in an enormous hype.  A kind ofWoodstock of Physics took place in 1987 with no less than thirty parallel sessions on the subject.  After 1986, the temperature at which superconductivity is possible was raised even higher, until in 1990 it stopped at 138 Kelvin, which is  -135˚ Celsius.

To everyone's surprise it appeared that high temperature superconductivity does not occur in normal metals, only in special copper oxides.  And Jan Zaanen's recently presented doctoral dissertation happened to be on copper oxides. Using a new spectroscopic technique he had discovered that electrons in copper oxide demonstrated a much stronger interaction than the electrons in simple metals. This meant that they have a completely different electron structure.

Zaanen's dissertation  was picked up in the US and quickly became one of the publications which everyone who wanted to join in the hype had to cite.  It led to as many as a hundred thousand publications.  Zaanen:  ' I can thank this for about 30% of my citation score.  The advantage of the hype, which also generated a lot of nonsense, was that materials based on these oxides have been the subject of much more study than would otherwise have been the case.'

Superconductivity at ultra cold temperatures comes about because electrons which hardly demonstrate any interaction (the so-called Fermi gas), in particular circumstances do form pairs, which gather together in one big quantum wave:  the superconducting Bose/Einstein condensate. This doesn't happen with high temperature superconductivity. Zaanen: 'The electrons in copper oxide don't make any Fermi gas. Large numbers of electrons interact very strongly with one another, and show a completely unknown collective quantum behaviour.' 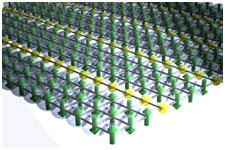 Zaanen, Gunnarsson (1987): Electrons come to a standstill in striped patterns

In 1987, Zaanen predicted that copper oxide contains stripe-shaped patterns of electrons. These stripes made Zaanen world famous, but they also unleashed a veritable scientific war, on which the dust has still not settled.  The stripes gave rise to his nickname of 'stripe fighter', which his main rival, the legendary Nobel prizewinner Phil Anderson, once taunted him with during a picnic.

Stripes in static form have since been routinely observed in copper oxides.  But these static stripes are very bad for superconductivity.  Meanwhile, there are a large number of experimental indications that these stripes are also present in the best superconductors, but now in a state of constant quantum motion on a timescale of a picosecond (10-12 second): the 'quantum stripe', also referred to as fluctuating or dynamic stripes. So far, there's no hard proof.  Nobody has yet managed to take measurements at a speed of 10-12 second. 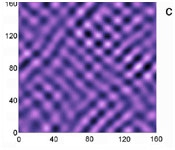 Zaanen: 'By a strange coincidence of fate, shortly after we had submitted the first stripe paper, the spin fluctuation data became available, which is still the prime indication for fluctuating stripes. We then imediately modified the version which came back from the referees with a comment that this data indicated the presence of dynamic stripes.  This was received as absolute heresy.  After a year and a half we were forced to call a halt to the fight with the referees.  That was in 1987. It was only in 1995 that the first evidence was available for the existence of static stripes.  And it took a long time -  until about 2000 - before it was accepted, this time purely because of the conservatively slow mass of the community.'

The interest in high temperature superconductivity has been an all or nothing affair. The hype turned into a headache when it seemed there were no short term lucrative applications. Zaanen: 'At the start of the nineties, you were wasting your time mentioning high temperature superconductivity in subsidy applications.' A small number of physicists - 'a group of gentlemen physicists' - carried on with their research, fascinated by the knowledge that conventional rules of quantum physics didn't seem to work.

Now high temperature superconductivity is in the spotlight, because of these fundamental aspects and the increasingly refined detection methods which are becoming possible   The journal Science mentioned it as one of the seven areas to watch in 2006.  And one of the leading figures in the research into high temperature superconductivity is Zannen, as mentioned last March in Nature Physics.

'If I hadn't caused all that fuss in the experimental community, I would have stopped a long time ago,' says Zaanen.  'I come from a field which stands or falls on its experiments.  The real work takes place in the lab.  If your experiments don't produce any results within ten years, you should drop your theory.  Otherwise, you can't continue to call yourself a theoreticist. It then becomes a religion.'

If it becomes possible to produce empirical evidenc for quantum stripes and other forms of that unexplained quantum collective behaviour, Zaanen believes this will mean a paradigm shift in physics.  'Everything which we experience as fundamental, the laws of nature, Einstein's theory of relativity, elementary particle physics, could become subordinate to the purely organisational principles of this quantum collective behaviour.'

Will we ever have a system of measurement fast enough to 'catch' fluctuating stripes?

Meanwhile, high temperature superconductivity, although not fully understood, has led to a small number of applications.  'If we had had persent-day technology ten years ago, things would have ben different,' according to Zaanen.  'Now there are a few applications.  But it is very expensive, because for cables which are cooled with nitrogen, you need silver.  In Chicago, there is one cable through which half the electricity for Chicago is transmitted. It means an enormous saving in space.  The only people to have invested in it are the US Navy, because it enables generators on ships to be so much smaller. And at the University of Twente, they have all the material available for a superconductive laptop, with a fridge on a chip. Investors in Silicon Valley are showing a lot of interest, because in ten years standard laptops won't be any faster.  But it does need an investment of billions.'