Computer science has its roots in mathematics. That is why at LIACS, theoretical research is undertaken by a team of computer scientists and mathematicians. Our efforts are focused on better understanding the fundamental characteristics of specific computational problems. 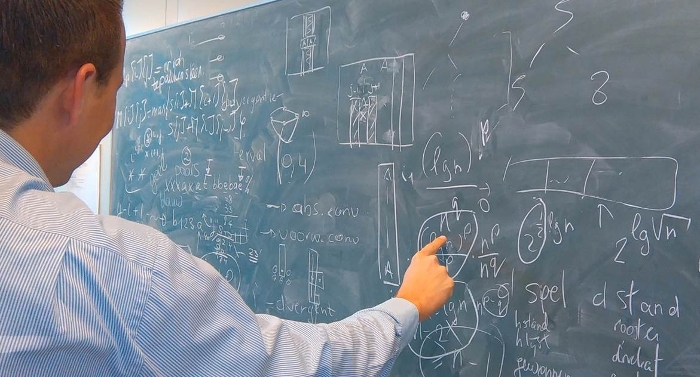 Our work regularly results in new, faster algorithms. Often, due to their wide range of applications, these new algorithms lead to across the board improvements in for example health care, industry, and biotechnology. To further ensure safety and dependability in mission-critical applications, like the auto pilot of an airplane and the controller of a power plant, we also study the correctness of software and algorithms. By creating algorithms that verify other algorithms (automating prove techniques for software correctness) we exclude harmful bugs that may never be revealed by testing alone.

One subject that enjoys much attention at LIACS is concurrency. In modern information systems, a large number of different components are often active simultaneously, leading to a huge variety of complicated interactions. The aim of our research into concurrency is to understand and model these interactions and predict their effect on the global state of the system. In collaboration with biologists for example, we produce models of the many processes that take place in live cells. As a result, it becomes possible to predict how a cell will respond to the introduction of an external agent, such as a drug, without doing an in vitro experiment.

We are also involved in research into coinduction. Coinduction is a relatively new mathematical technique that deals with circular mathematical structures. Due to their circularity, these structures can capture infinite systems, comparable to the ‘Droste effect’. For this reason, coinduction can be used to abstract various complicated real-time and probabilistic systems, in order to prove properties over all of them in one strike.

News on our Theory theme