How to understand the simultaneously dis- and reappearance of letters in contemporary culture, and how does this Neo-Epistolarity relate to media-technological change?

Over the last decades, a remarkable development can be observed: a coinciding dis- and reappearance of the letter. On the one hand, in rivalry with the pace, cost and effort of new media usage, the letter has come to lose its attraction as an everyday means of communication. At the same time, and perhaps more than ever before, the letter appears to stimulate, tickle and excite the cultural imagination. For the epistolary medium is pervasively rehabilitated in a wide range of literary, artistic and ordinary practices: new letter writing communities are convoked, Mail Art and the epistolary novel are reinvented in a profusion of texts, images, objects and gestures - a disparity of forms that I assemble under the notion of Neo-Epistolarity. 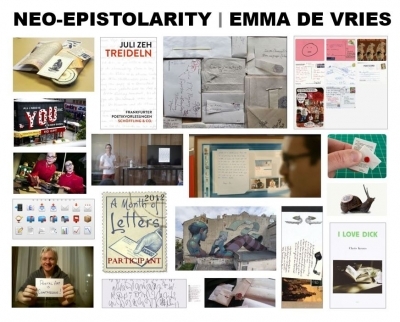 How to understand Neo-Epistolarity? How do these letters relate to the techno-cultural matrix in which they re-introduce themselves? Is such a rehabilitation of old forms necessarily a reactionary, oppositional gesture? And if not, how can it be understood differently? What perspectives does Neo-Epistolarity open to media-technological changes and their role in our experience of and approach to the world?

It is tempting to explain a return to the old as a retreat from the new, akin to the Slow Movement or the recent fashion of Digital Detox. And indeed, some neo-epistolary mail spreads new media critique. Just as often, however, the recurrent rhetoric of new media critique is not simply reiterated, but playfully turned upon and against itself. Many neo-epistolary works combine analogue use of paper, pen and postal delivery, with a strong engagement with digital culture. Also here, the new epistolary imagination cannot be exhaustively explained as expression of technophobia or nostalgia. Instead, my research probes the possibility of conceiving Neo-Epistolarity, rather than as resistance against, as inquiry into media-technological change and its cultural implications.