Political Science graduate Ross Gildea has won the 2016 Faculty of Social and Behavioural Sciences Research Master’s Thesis Prize. Addressing the question why national governments, international organisations and NGO's prioritise some humanitarian crises over others, Gildea combined theoretical insights from cognitive psychology with explanations in the international relations literature, and the use of systematically varied vignettes from marketing science. ‘An inspiring piece of interdisciplinary research’, according to the jury. ‘Very professionally executed by a young researcher.’

Having previously been awarded the 2016 Institute of Political Science Research Master Thesis Prize, Gildea was the nominee for political science. His thesis, The Political Psychology of Humanitarian Issue (Non-)Adoption in International Politics, competed with work by a student from Education and Child Studies and from Psychology, the other two disciplines offering two-year research-oriented master’s programmes.

Gildea’s thesis, ultimately, stood out. ‘Overall, the thesis is well-written and clearly agued. It is a fine example of theoretically grounded and methodologically innovative engagement with a topic of clear relevance to societal debates and political issues.’

Unfortunately, the laureate could not personally receive his prize and the applause. In his place, Niels van Willigen, director of studies of the Institute of Political Science did the honours. Quite fitting, given that he, together with Daniel Thomas, served as supervisor of the winning thesis. 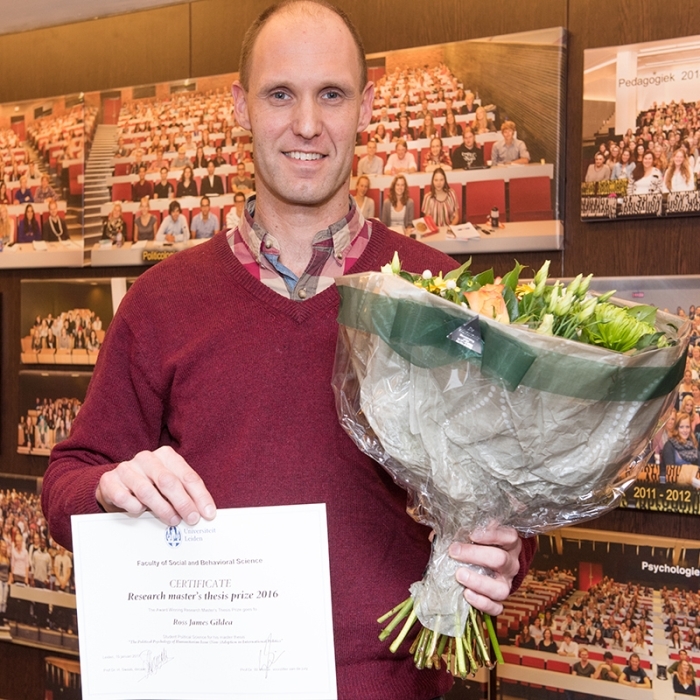