"The key to success is to dare to break the rules"

“To change the world, you do not need everybody. You only need one. So, will you be the one? That’s the question.” Saturday December 3rd, Nobel Laureate Professor Muhammad Yunus gave a special lecture at the Anna van Buerenplein campus of LUC The Hague. (Text: Jakob Semb Aasmundsen; Photography: Paul Préaux)

Throughout his career, Professor Muhammad Yunus has been involved in many different kinds of development work. In 1983, he founded Grameen Bank in his home country of Bangladesh. Under his guidance, the bank gave out small microcredit – small loans – without requiring collateral. More than other types of credit, the Grameen Bank managed to reach the rural and poor parts of the Bangladesh. This way of doing business – through a non-loss, non-dividend company was later called ‘social business’.

In his lecture at LUC The Hague, Yunus addressed how he came up with an entirely novel way of banking, as he did with the Grameen Bank. His answer was very simple: “I never took a course in banking. I did not know about the rules and procedures, and I was completely free to do everything the way I wanted. I look at the conventional banks and learned how they do it, and then I do the complete opposite. They go to the rich, and I go to the poor. They start a department in the financial district, I start it in the remotest village. Still today, the banks are always located in the rural villages, to help the people there.” 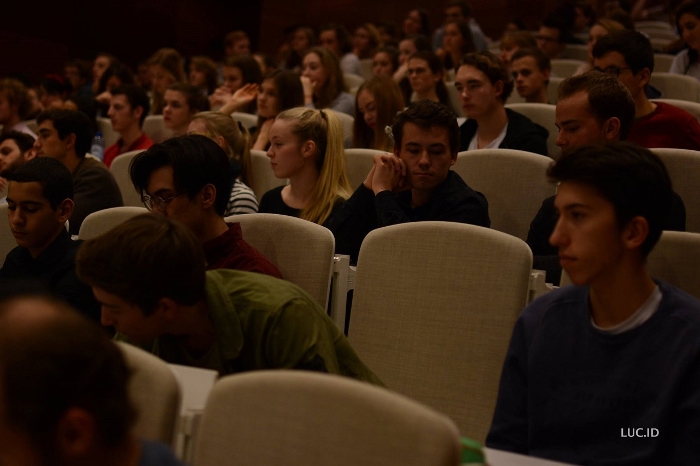 Professor Yunus, who describes himself as an optimist, believes in a bright future for the world, because of the power of the individual. “To change the world, you do not need everybody. You only need one. So, will you be the one, that’s the question. Once you have decided that, determine what change you want to create and work towards it. Either it’s about poverty, unemployment, climate or another cause.”

“The future means you, the young people. You have an enormous capacity in your hands, because technology is in your hands.

The LUC students in the audience are part of the most powerful generation ever. According to Yunus they have the power to solve the global challenges that are studied at LUC. “The future means you, the young people. You have an enormous capacity in your hands, because technology is in your hands. You have access to tools which earlier generations never had the access to. If you don’t use your power, it will just be wasted. Use it. Whatever way, use your power to make positive change.”

At the end of the lecture, both students and staff were inspired by Professor Yunus’ words. Dr. David Zetland, convener of LUC’s Social Business and Entrepreneurship minor, was impressed by Professor Yunus’ talk. “In this field, Yunus is a legend. It was an amazing opportunity to have a practitioner like him at LUC to share his experiences about social businesses and entrepreneurship. Like we try to do in our minor, Yunus focused on each student’s ability to go out there and create things of value to make the world a better place.”

The lecture was organized by LUC student Joanna Ruiter (LUC Class of 2018), who met Muhammad Yunus five years ago at a social business event. This summer she went to Bangladesh to intern at the Yunus Centre, where she invited Yunus to come to The Hague.