The Leiden Institute of Advanced Computer Science congratulates alumnus Pepijn van Heiningen and the with the Technische Hochschule Köln shared PhD-student Samineh Bagheri. At the SSCI 2016 conference on computational intelligence in Athens last week, both of them won an award for the high quality of their papers. 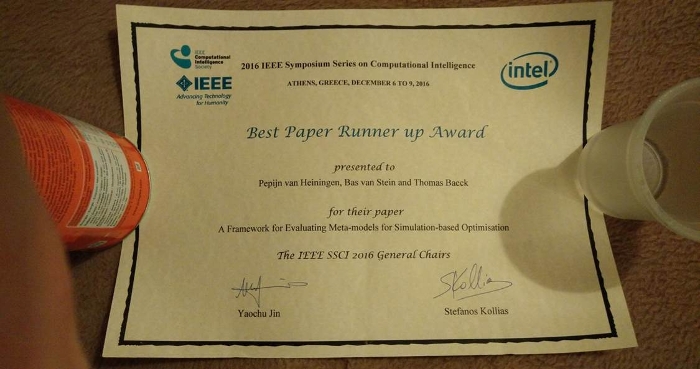 ‘We won the Best Runner Up award, which is basically the second prize of the whole conference with 460 submitted articles in total. I was completely surprised and shocked, as so many other researchers were there. They asked me to come forward and say something. I couldn’t get much more out of my mouth than ‘I can’t believe this’ and ‘Thank you so much’. It was an amazing experience.

Van Heiningen’s research was honoured because it gives insight into the working mechanism of different metamodels for optimization algorithms. ‘In industry, processes or products are often optimized with algorithms. Think for example about a car, which you aim to make lighter, but remains as safe as before. And in that respect, there are many more characteristics you want to optimize. That is why it will cost very much time and computational power to do a complete run with optimization algorithms. Metamodels of these simulators try to fasten this process.

‘My essay is a large comparing study of different metamodels. I looked at Decision Tree, Random Forests, Kriging and Support Vector Regression. I found out what happens if the amount of dimensions grows and whether one of the techniques will then have advantages over the other. Furthermore, I looked at the influence of the arrangement and how many samples are necessary before it works well. In total, there were 9900 different tests.

The subtitle of the publication is: ‘How expensive is your lunch?’ Van Heiningen: ‘There is something like the No free lunch theorem. It says that there is no model that is in all cases better than all the other models on all benchmarks. Every benchmark will have a variety that works best. Hence the subtitle, as we did compare models, but on beforehand we didn’t expect one of them to be the best. So what we really wanted to know, is how expensive or difficult it would be to apply this method.

Samineh Bagheri uses comparable metamodels for her PhD-research, although she prefers to use the term ‘surrogate models’. Bagheri is a member of the Cologne University of Applied Sciences in Germany, with Thomas Bäck of the Leiden Institute of Advanced Computer Science as a promotor. At the conference in Athens, Bagheri won the Best Paper Award for PhD-students.

Bagheri, too, explains her work with the example of safe cars. ‘How can you test whether a car that is more energy-efficient, is just as safe? One solution is to crash it against a wall. But that is clearly not a good idea because it would be very expensive. Another solution is to do advanced computer simulations. But those, in turn, are quite time-consuming. Every new car-design would take a full day to be tested. So what do we do? We use surrogate models: cheaper mathematical models to run our optimization process.’

‘Unfortunately, it is not easy to choose the right model. That is why we have proposed an algorithm that automatically chooses the best model from a pool of models. This happens online and over and over during every step of the process.’