Henri Bok and his wife Ann Eleri Evans (tenor saxophone) will contribute as well to the conference Doctors in Performance, to take place in Dublin (8 and 9 September, Royal Irish Academy of Music) as duo Hevans. The title of the lecture recital is: “The process of developing the microtonal capabilities or single reed instruments”.
The concert will comprise the following works: There are Wholes Neither nor Parts III (2011) by Scott McLaughlin, Early One Morning (2014) by Christopher Fox and Bok’s newest piece Small Change (2016).

PhDArts researcher k.g. Guttman will be presenting her performance  "I asked the audience to close one eye" at Blackwood Gallery's Running with Concepts: The Choreographic Edition, at the University of Toronto, Canada on September 17th, 2016

“I ask the audience to close one eye” is a choreographic coming-into-form of personal/political latencies of love, questions of genetic pre-dispositions, and animate/inanimate relations.

The performance mixes the digital presence of the archive with the format of the live interview. Using performance tactics of proximity, framing, pausing and pacing, the performance makes unlikely connections between strangers and objects. 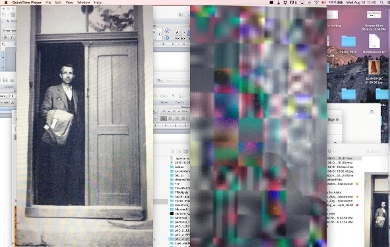 docARTES PhD researcher and oud player Nizar Rohana has recently released a new video of a solo piece from his album Furāt (Euphrates), titled Ṣafṣāf Abyaḍ (White Willow). The video was recorded at the Metaalkathedraal Utrecht and can be accessed online here.

More information about this record can be found on his website

docARTS PhD researcher and flutist Ned McGowan has recently released a new record titled: The Art of the Contrabass Flute. The CD was released on August 11th and is available on Karnatic Lab records. Digital download available on: Amazon, iTunes, Google Music. 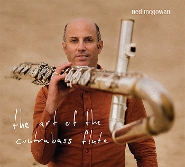 Besides this, his piece Rickshaw Zip for piccolo and piano (2015), awarded by the National Flute Association (nfaonline.org) has been edited by Donemus Special Series and will be performed at NFA Convention by Tracy Doyle (piccolo) and Wendy Caldwell (piano). Winners of the Convention Performers Competition play prize-winning pieces from the Newly Published Music Competition. This took place on Sunday, August 14th at 9.00 a.m. at the Town and Country Convention Center, Golden Ballroom - 500 Hotel Circle N, San Diego, CA, United States.

2) TERRA MEDITERRANEA: IN ACTION
17/09 - 20/11/2016
Eleni Kamma participates in this group exhibition at HALLE 14 that investigates the turbulent phase that the Mediterranean Sea and its surrounding countries are enveloped in.
In cooperation with the NiMAC - Nicosia Municipal Arts Centre in Cyprus.
Link

3) Indiscipline
3-4 September 2016
Eleni Kamma participates in this festival held at Palais de Tokyo, where more than 30 artists based in Brussels, comprising of visual artists, performers, choreographers and video makers, will show their work.
Link

4) CO-ACTION
22/08 - 28/08/2016
Eleni Kamma contributes to this series of one-week courses at Vilnius Academy of Arts (VAA) and Aalto University School of Arts and the Nida Art Colony, Neringa in Lithuania. The courses feature seven lecturers, academics and selected doctoral students who will reflect on the value of artist placements in non-arts organisations, such as business, political and science bodies.
Link

Approaching the 3s. The spatial, the social, and the sensorium.
2-7 October 2016

docARTES researcher Anne Veinberg will perform with live coder Felipe Ignacio Noriega as duo Off<>zz  on the 31 tone Fokker Organ at the Lost and Found event at Muziekgebouw aan 't IJ at 20.00 p.m. on September 2nd.

Within the the International Computer Music Conference in Utrecht, Anne will perform m'habiller encore by David Litke for piano and live electronics and Chromotoy I Three Sketches  by Christina Viola Oorebeek for toy piano, tines and soundwheel with live electronics on 14th of September at 19.00 p.m.

On the 15th of September, another performance of her duo Off<>zz is planned for the session at 23.00 p.m.

Together with Felipe Ignacio Noriega, she will present their paper SCHEDULED VISUAL CONTACT AS A STRATEGY FOR IMPROVED COMMUNICATION IN A LIVE CODER AND PIANO ENSEMBLE and give an associated interactive performance at the International Conference on Live Coding in Hamilton, Canada.

docARTES researcher, double bass player and vocalist Shaya, together with his trio Zvov, have created a new show called Zvov Sensory. This show is planned to tour both Israel and The Netherlands in the coming months. A list of the programmed concerts is included below.

In order to realize this project the trio has started a crowd-funding campaign, which can be accessed here:

Zvov Sensory in a home concert in TLV

The tour continues into the month of October. More information about the shows can be found on their website and facebook page.