A Summary of the Lecture by the Ukrainian Ambassador

Wednesday the 23d of March, Olexander Horin, the ambassador of the Ukraine honoured us with a visit to discuss his vision on the referendum and the current political situation in Ukraine. Hereby a short summary of the lecture by Professor Madeleine Hosli, who attended the event.

In his lecture, the ambassador gave background information on developments in the Ukraine and pointed to the need for his country to further develop the ties with EU member states. According to Horin, his country shares many of the ideas, norms and values with the latter and it would be important to further strengthen this. Nevertheless, he reckoned that Ukraine still faces many challenges as a country, including corruption. In his opinion having closer ties with the EU will help combat exactly such problems. 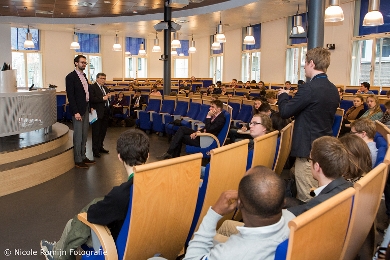 The ambassador asked the audience who was going to vote in the Ukraine referendum. Many raised their hands. He then asked who had read the text of the Association Agreement between the Ukraine and the EU. All of these hands disappeared.

The ambassador then(rightly) asked how you can vote on whether you approve of a text if you do not know it? He feared that the referendum may also be about issues that are non-related with the actual agreement, which is really an agreement that has been negotiated over a long time, signed and ratified – so opening up the ‘box’ at this stage may be a bit unusual. If there would be a good point to do so, it might rather be at the beginning of the process, when the actual negotiations on a potential agreement set in.

The ambassador and his colleague, both heavily involved in International Relations and Ukraine’s anti-corruption policies, clarified for the audience how complex the issue of the agreement is. The question is therefore how to balance satisfying a large sense of desired orientation towards the EU in the Ukraine with being careful in the larger political ‘game’, which of course also refers to the position of Russia. 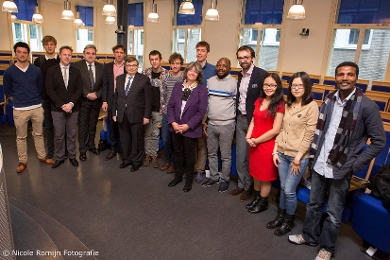 Participation amongst students was high and the questions focused on various topics, including whether the agreement would imply that lower-quality (and lower-priced) goods would get imported into the EU on the basis of the agreement. The ambassador referred to market processes and quality control involved in trade and indicated that on this basis, potential problems in this regard will solve themselves – low quality products will not be demanded by consumers and hence, do not really constitute a threat. Another question involved immigration from Ukraine into the EU, about which the ambassador was of the opinion that figured do not indicate that this poses a serious threat.

Given the lecture of the ambassador and his colleague, could there be an element of truth in the observation that the referendum appears to be about wider issues than what it is supposed to be about? Could it (again) be more of an expression of dissatisfaction with other issues than with the actual agreement and partially be driven by a mode of ‘Euro-skepticism’? Ironically, it seems support for the EU, at the moment, seems to be lower than in some of the EU’s ‘older’ member states than in newer ones or states just outside the EU’s current borders.