The behaviour of strongly correlated electron systems, such as high-temperature superconductors, defies explanation in the language of ordinary quantum theory. A seemingly unrelated area of physics, string theory, might give physicists a better understanding of the weird behaviour of these kinds of collective electron systems. A bird’s eye view in Nature by five world experts in the field, including Jan Zaanen from Leiden University, the Netherlands.

p until the mid-eighties, it was commonly thought that superconductivity – the complete loss of electrical resistance in a material – only occurred at temperatures below 30 K. The discovery of high temperature superconductivity in copper oxides (1986) ranks among the major scientific events of the twentieth century. In less than a decade, temperatures went up to a mind-blowing 165 K, promising room temperature superconductivity in a near future. But to reach that point, new theoretical descriptions are indispensable. That is the take-home message from an extensive review in this week's Nature by five leading experts in the field, including the Dutch theoretical physicist Jan Zaanen (Leiden University).

Photo: If high-temperature conductors can be explained in detail, it will probably be possible to transport electricity over thousands of kilometres. From the Sahara to Northern Europe, even

Conventional superconductors can be described by an extremely successful theory, developed in the late 1950s by John Bardeen, Leon Cooper and John Schrieffer (Nobel Prize 1972). Their theory describes how, at low enough temperatures, single electrons in a metal join hands and form so-called Cooper pairs. According to ordinary quantum theory, these paired electrons behave as one single particle, with new properties. The most important feature is that a Cooper pair can travel freely, without any resistance at all, through the material. 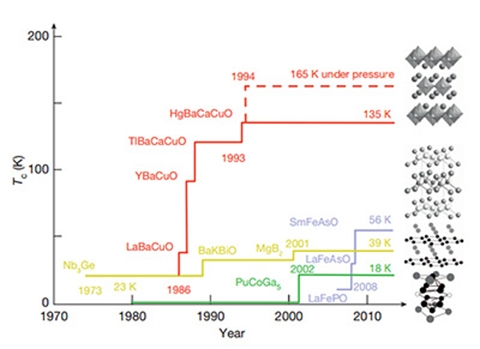 The maximum temperature at which superconductivity takes place rose dramatically over a period of time, but has been stagnant for the past twenty years. New theories may point the way to better superconductors. Illustration: Nature

In search with a new theory

With a bird’s eye view, Jan Zaanen and his co-authors not only describe the recent developments in the field of high-temperature superconductors, but connect them to strongly correlated electron systems in general. Zaanen: 'These are all collective systems with huge numbers of electrons, and ordinary quantum theory just doesn’t suffice to describe them. We are desperately in need of a new theory.' That theory, the authors elaborate, could very well be one that originates in a completely unrelated field of physics: string theory.

In string theory, there are many dualities: equivalent descriptions of a problem in two different ways. Depending on the problem, one description is usually easier than the other. The most famous duality was discovered by Juan Maldacena in 1997. This so-called AdS/CFT duality connects a quantum field theory with a theory of gravity. It turned out that there is a holographic connection between the two, where the field theory can be thought of as living on the boundary of an anti-deSitter space.

In 2007, theoretical physicists like Jan Zaanen, started to use this holographic duality as a mathematical toolbox to play around with in the field of superconductors. To their surprise it turned out that certain weird aspects, such as the behaviour of ‘strange metals’, can be described as the holographic dual of a black hole. That doesn’t mean there are real black holes in superconductors, but the same mathematical tools can be used to describe both phenomena.
As a bonus, string theory also benefits from this exchange of tools. In the field of quantum information, in particulary with hot topics such as large scale entanglement, there are many similarities with strongly correlated electron systems, such as superconductors.

A revolution in Physics?

The authors conclude their extensive review with the remark that ‘The jury is still out on whether this is a coincidence or signals the onset of a revolution in physics.’ But when asked, Jan Zaanen is more outspoken: 'I think we are facing a revolution.'