The research inventories and interprets signs of socio-political involvement in Dutch literary periodicals between 1950-1963. The fifties is known as a binary decade: it was both a period of restoration of pre-war society, but also a period where all kinds of renovation trends were discernible, prefacing the turbulent sixties. In regard to the latter, literature was ahead and this is reflected in the literary periodicals of the era. Pillarized periodicals, such as the Protestant Ontmoeting and the Catholic Roeping, were published, but even at the end of the forties others had broken with the existing framework determinedly: the ‘Vijftigers’ entered poetry and presented themselves in the periodicals Reflex, Braak, and later Podium. Sensational performances accompanied their 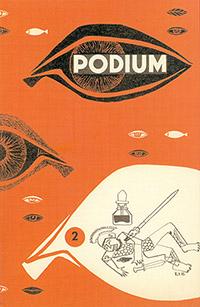 experimental poetry, wherein the poets react against civil society and its lethargic literature on the ‘klein geluk’. They vocalized a new poetry, “een stem dwars door puinstof heen”, as Remco Campert versed in 1950 in Libertinage. There also was a political side to this literary revolution, which is explicitly shown in the periodicals. In my research, the emphasis is on these and other progressive voices that sound from poetry, but also in prose fiction, such as the work of Mulisch and Wolkers, and in essays by, for example, J.B. Charles and H.J.A. Hofland. Engagement in texts is often an elaboration of the (political?) agenda of the editorial board: “poëzie is realiteit”, as Gerrit Kouwenaar put it in Reflex.

In the periodicals, a number of themes occur repeatedly. Both the Second World War and the process of decolonization clearly left their traces, but most attention was paid to issues that occur at ‘the cold front’: the Cold War was ubiquitous. In all periodicals, events such as the Soviet invasion of Hungary or the threat posed by communism in general put pens in motion. For a present-day reader, this perhaps requires a mental switchover because the Cold War stayed ‘cold’ in the Netherlands: it did not lead to military confrontation. However, in the fifties, the Cold War was a direct extension of the Second World War, and a new war hovered over the country like a dark cloud. The Netherlands unanimously seemed to seek shelter behind the broad shoulders of the United States, but some people opposed. In literature, they strongly protested the rearmament of West Germany, the nuclear-arms race, and anti-communist sentiments that left no room for nuance 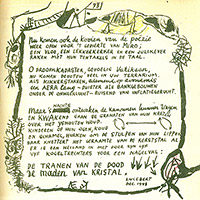 No doubt the most powerful literary voice in the fifties was that of Lucebert. This virtuoso’s superb, intriguing and also often enigmatic verses are a fruitful subject for literary study. Yet the socio-political engagement in his early work, and in the work of other Vijftigers, has never been subjected to extensive research. His socio-political involvement is often solely considered to be part of his revolutionary image, and his poems that reference actual events are dismissed as ‘gelegenheidswerk’ or occasional poetry.  The verses he published in Podium, Maatstaf and Braak, however, show that his socio-political engagement was an essential component of his poetical work. My interpretations of his poems demonstrate that Lucebert, in his exceptionally poetical way, transcended the stigma of occasional poetry, and that he continuously shaped the complex relationship between poetry and reality.
My dissertation will prove that the new poetry advocated a clear socio-political engagement, and that literature in the fifties instigated a voice of protest in the public debate – a voice under the guise of “een hard en waakzaam woord” (Lucebert, ‘de stem van de meester’, Podium 1954).