In this postdoctoral research project Dr. Bleda Düring aims to investigate the Early Holocene occupation of North-Central Anatolia and the introduction of Neolithic technologies and sedentary lifeways in the region.

Bleda During obtained funding for a 'Veni' Postdoctoral research project funded by the Netherlands Organisation of Scientific Research (NWO) and the Faculty of Archaeology of Leiden University. This research project takes place between September 2007 and September 2011.

The period between 10.000 and 6000 calibrated BC in North-Central and Northern Anatolia remains a blank on the archaeological map. This is surprising given the fact that a sequence of Mesolithic and Neolithic cultures dating to these millennia has been established in South-Central Anatolia, and that both regions share a similar ecology.

The main method for investigating the so far elusive early settled Prehistory of North-Central and Northern Anatolia is by way of a field-walking survey: a technique so far little used in Turkish archaeology. It is assumed that many of the early settlements are small and dificult to find, and only an intensive survey can pinpoint them. From August 2009 I direct the Cide Archaeological Project ( www.cidearchaeology.com) on the western Black Sea coast, one of the aims of which is to find Early Holocene settlements.

A second strategy is to utilise absolute dating methodologies for the early ceramics in North-Central and Northern Anatolia, which have often been difficult to date with comparative means, beacuse of a lack of excavated sequences in the area. The idea is to use OSL (optically stimulated luminescence) and possibly also ceramic rehydroxylation dating. If we find obsidian, rindth hydration analysis will also be used.In this manner it is hoped that new light can be shed on the Early Holocene occupation of North-Central Anatolia and the dispersal of Neolithic practices in the Near East. Further, it is hoped that this study can contribute to the development of methodologies for investigating archaeological dark ages. 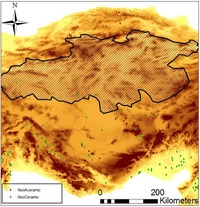