In January 2008 a small team from the Caribbean Research Group, Leiden University, in collaboration with Dr. Lennox Honychurch of the Dominica Museum, Roseau, surveyed part of northeast Dominica in order to identify settlement sites of the Cayo complex.

Dominica is a heavily forested volcanic island with a number of peaks surpassing 1000m. The area investigated is situated some 6-15 km north of the present Carib Territory which is home to a thriving community of descendants of the historic Island Caribs.

In total, five sites were examined by surface collecting and test pitting, all of which appeared to be pottery deposits of variable extent and partially multicomponent in character. Three sites could be identified as yielding different amounts of Cayo pottery fragments. Sites surveyed include Woodford Bay, Walker's Rest Bay, Melville Hall 1&2, and Sophia Bay. 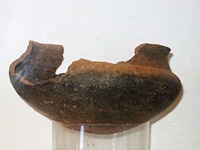 These ceramics have mainland affiliations with the Guianas, but also with Greater Antillean ceramic traditions. The general "invisibility" of Cayo pottery is partly due to its drab colour and sparseness of decoration. This may have been the reason why the ceramics of this late prehistoric to protohistoric complex have long remained unrecognized by archaeologists, be it avocational or professional, in the Windward Islands.

Future research should focus on the recovery of many more Cayo sites in the Windward Islands, preferably by combining ethnohistorical investigation with archaeological reconnaissance. This has recently been done for example on St. Vincent, at the site of Argyle. 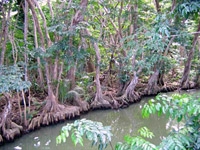