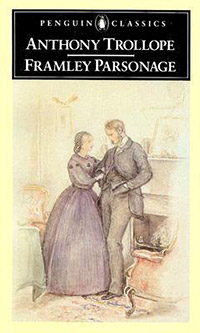 Framley Parsonage happens to have been the last novel that I read this summer before embarking on a tour of North America (I have read no novels since), and so when last month’s reviewer asked me to do this review, my initial reaction was to say “sure!” but to think, “surely I will not actually review  FP.”  FP is quintessentially ‘out.’ It could not be less hip. But I also saw this as a challenge, and so decided to accept it. Why on earth would anyone read  FP in this day and age?

The first topic to address is the 19th-century novel. Generally I eschew fiction written after 1930 (unless it comes highly recommended!). In brief, no human art form has conjured the subtle shading of actual lived experience as the 19th-century novel. The culture, prior to electricity, spawned a class of hugely literate people, with no distraction from film, radio, TV, or internet, and so all of their thoughts went into actual, present, lived relationships—lived, reflected upon, and written about at the speed of natural life; and the best examples of the genre have seldom been matched.

George Eliot, Henry James, Thomas Hardy, Tolstoy, are my favorites; others don’t quite reach from this mark but have much to offer. How to approach such novels? There is usually a love plot, either tragic or comic, but that’s only 5% of what’s going on. There is idealism, which I think most of us aspire to whether we believe it consciously or not; and there is bourgeois morality, and conventional piety, and sexism (though often far less than one would think), and racism features seldom; but again, there is so much on offer about the human condition, that if one puts down the books in protest, one misses magnificent life changing and life-affirming things that one should not.

Why Trollope? The first four authors above present schemas, they have world-views, that are wonderful to puzzle out.  But Trollope doesn’t, really. And he has no murder at Stone-Henge, or tragic trysting at the Palazzo Veccio. There is no overt heroism, and no overt tragedy; no Dickensian grotesqueness or pantomime. This is Trollope’s greatest appeal. Where other greats offer morality-play hidden meanings, he offers something much closer to lived experience.  He is arguably simply more mature. For this reason, after reading the more “epic” novelists above which can set one’s youthful soul singing, my mellower, older self has gravitated to Trollope.

Framley Parsonage is the fourth of five novels in the ‘Barsetshire Series.’ The series focuses on the clergy in an English cathedral town. This subject is what makes the whole series so ridiculously unfashionable on the face of it. But if one looks closer, one realizes that most of today’s male academics, 150 years ago, would have been clergymen (in protestant countries anyway); and the women would have had to have been content to be clergymen’s wives, or else become radical suffragettes (or both)! Being a clergyman is simply what one did after one graduated from university, if one was not inclined to be a lawyer, doctor, or soldier. If one was literate, inclined towards reading, society provided a decent sinecure for you: you had to prepare one or two lectures per week, visit the flock (hold office hours), and generally be available to dispense wisdom and advice. The majority of clergymen of course were curates, meaning they actually had to perform (sometimes rigorous) duties for relatively little money; those with seniority and, especially, connections and patronage networks, moved up in the ranks and could end up earning 10 or 20 times a workmans’ annual wage, while performing very few duties at all. Many English canons spent years in a row living as minor noblemen in Italy, citing only ‘health reasons,’ as an excuse for their prolonged absences.

The Barsetshire series begins with the brief  The Warden; this is memorable because it squarely addresses the sinecure issue – it’s highly resonant for today’s academics, since within the last generation we’ve seen an older, more relaxed generation of academics replaced by a harried, hyperactive generation who must publish or perish to an extent that always pushes the limits of human endurance. It’s fascinating to see that in the 1850s parliament was already tossing ‘old-fashioned men’ like the eponymous music-loving Warden ‘into the dustbin of history’, replacing them with young, cynical go-getters such as Mr. Slope (introduced in the second book). Within a generation, under the impetus of industrialization, the old feudal sinecures had all been divvied up into tiny salaried stipends, with many strings attached. But what, really, was gained by this? Is society really better off with Mr. Slopes, rather than men like the Warden?

The second book,  Barchester Towers, is the most memorable, and shows Trollope’s wit and humor in full force. The opening chapters are unforgettable: the old bishop is dying, and his son anxiously waits at his deathbed, knowing that the present parliament will undoubtedly confirm him as the new bishop... but that the government is teetering and about to fall. The ambitious son thus finds himself in the difficult position of trying not to pray for the speedy death of his father. In the end, of course, the government falls just as the old bishop expires, and the new government confirms a radical reformer as the new bishop. But it is soon apparent to all that the new bishop is entirely ruled by his radical reforming wife, who governs the diocese through her chaplin, Mr. Slope. The books do not caricature, but explore the manifold ways in which ambitious women could effectively govern society even if they often, though emphatically not always, had to do this more subtly than their male counterparts. Trollope’s genius shows itself in this way as well.

Finally, we get to  Framely Parsonage. In this scenario, a young man of middle-class family is helped through university by a local lady, after having been accepted as her son’s (the future local lord’s) playmate since youth. The lady patroness then hands him the vicariate of her estate very soon after his graduation, guaranteeing him a good income and assuring that he can marry a lovely lady of his choice. But Mark is young, and chafes a bit at the clerical collar; he envies the freedom of his companion the future lord; he wants to own a fine hunting horse, and to move in higher social circles; and so he consciously flouts the will of his patroness, and his own domestic tranquility, and begins to hang around with ‘worldly’ members of parliament and the regional party set. During one of these parties, which often lasted until dawn, a would-be patron presses upon him a ‘bill’ to sign, assuring him that he will pay it off and that nothing bad will come of it. To refuse to sign would seem immeasurably square, and so, drunk, and delirious with the headiness of it all, Mark signs. Of course, it comes back to haunt him; the new patron does get him a canon’s stall, tripling his income at a stroke and encouraging him to move to the metropolis, but his wife, his patroness, and his old friends are all uneasy, and in the end, after months of nail-biting and extremely realistically portrayed stress of being in debt with no obvious means to pay, the bailiff’s men arrive and begin to inventory Mark’s furniture. His aristocratic friend presses a loan upon him to help him save face, and, humiliated, he resigns the canonry that, as the public now knows, he gained by dubious means.

As a foil to Mark’s story, there is interwoven another interesting tale of a curate who, eschewing proferrment too much, is barely able to feed his family. Thus, Trollope makes the point that while too much ambition can spin out of control—albeit in wonderfully subtle baby steps that are virtually unnoticeable as they are lived day-to-day—too much self-reliance likewise can lead to dissatisfaction and unnecessary hardship. So the tale is one which Deirdre McCloskey might call one of ‘bourgeois virtue,’ but it rings throughout with sage reflections on real career decisions, and real interpersonal decisions, as real people have to deal with them every day. All told by an undoubtedly subtle, wise, and humane observer of human interaction, of the sort that modern society finds exceedingly difficult to produce.

Jeff passes the pen on to Meike de Goede.