Kaarle Wirta is one of the four PhDs in Cátia Antunes’ ERC Research Project 'Fighting Monopolies'. 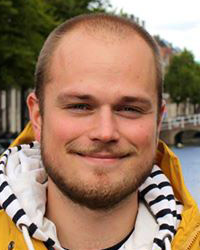 I was born in a bilingual family in Finland (Swedish and Finnish) and did both my BA and MA studies at Åbo Akademi University on the west coast of Finland which is the only Swedish speaking university in the country. During my studies in Finland I focused mainly on general history, global history, Scandinavian history and sociology. I did my ERASMUS exchange in Germany in beautiful Leipzig. At Leipzig University I focused on African studies with an emphasis on the spatial turn, globalization and history. My Masters dissertation was a study of Danish overseas activity on the West African coast and the ways in which the local administration reacted to the shift from a chartered monopoly company to becoming part of the Danish crown in 1757. I attempted to show that global connections and power relations can be studied through analyzing local cases, in the form of governor letters.

This autumn I started as one of four PhD candidates in Dr. Cátia Antunes’ ERC-funded FIGHT project. My part in this research will be tackling the early modern (1600-1750) Scandinavian domains overseas. I will focus on the empires Denmark-Norway and Sweden-Finland. These two empires are connected through trade and politics, and even if they may portray a specific type of monopoly of imperial exploitation (chartered monopolies) they demonstrated differences that affected the way they functioned in a global context. The geographical space for my project includes the settlements for the respective empires in Asia, Africa, the Caribbean and the areas of the North Sea (Greenland, Iceland and Lapland). I will explore the interactions of the large companies and the free merchants, working through global networks consisting of people with a variety of nationalities and backgrounds who were operating across borders. Through these self-organized networks free agents were fighting colonial monopolies, spreading ideas, crossing borders, and in various ways defying institutional empire.