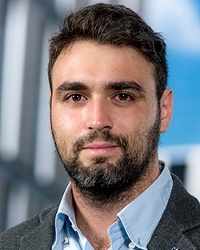 We study queue-based activation protocols in random-access networks. The network is modeled as an interference graph. Each node of the graph represents a server with a queue. Packets arrive at the nodes as independent Poisson processes and have independent exponentially distributed sizes. Each node can be either active or inactive. When a node is active, it deactivates at unit rate. When a node is inactive, it activates at a rate that depends on its current queue length, provided none of its neighboring nodes is active. Thus, two nodes that are connected by a bond cannot be active simultaneously. This situation arises in random-access wireless networks where, due to interference, servers that are close to each other cannot use the same frequency band. In the limit as the queue lengths at the nodes become very large, we compute the transition time between the two states where one half of the network is active and the other half is inactive.

In the second part of the talk we consider networks with a general bipartite graph as interference graph. We decompose the transition into a succession of nucleations on complete bipartite subgraphs. The total transition time depends in a delicate way on the architecture of the graph and is achieved in a greedy way. We formulate a greedy algorithm that takes the graph as input and gives as output the set of transition paths the system is most likely to follow. Each of these paths is described by a sequence of subsets of activating nodes forming complete bipartite subgraphs. Along these paths we compute both the mean transition time of the graph and the law of the transition time on the scale of its mean. Again, we notice the three regimes of behaviour depending on how the activation rate depends on the current queue length: subcritical, critical and supercritical.