Democracy at Risk in The Americas? A Discussion on Human Rights and Democracy with the Secretary General of the Organization of American States and the former Head of the IACHR

Special Event featuring the Secretary General of the Organization of American States Mr. Luis Almagro and the Executive Secretary from 2001 to 2012 of the Inter-American Commission for Human Rights, Mr. Santiago Canton

The Organization of American States has just released an unprecedented report on the possible commission of crimes against humanity in Venezuela. This is an unusual opportunity to hear directly from top leadership of one of the most important Regional International Organizations in the world. They hope to talk directly with students, faculty, and civil society on pressing issues of human rights in Venezuela, Nicaragua, and elsewhere in the Americas.
Space is limited, so please register at grotiuscentre@law.leidenuniv.nl if you want to join us. 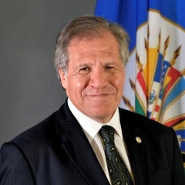 Luis Almagro serves as 10th Secretary General of the Organization of American States. A career diplomat, he also served as Foreign Minister of Uruguay from 2010 to 2015.
In addition, he was elected Senator in October 2014. He also served as Ambassador to China for five years, after occupying senior diplomatic posts in the Foreign Ministry of his country and in the Embassies of Uruguay in Germany and Iran. In 2014, Foreign Policy magazine named him a Leading Global Thinker—one of only 10 decision makers in the world who have been granted this international distinction. He is a lawyer by profession.

Santiago Canton is currently the Secretary for Human Rights for Buenos Aires in Argentina. He previously served as Director of RFK Partners for Human Rights at the Robert F. Kennedy Center for Justice & Human Rights. Before joining the RFK Center, Mr. Canton was the Executive Secretary of the Inter-American Commission on Human Rights for eleven years after serving as the first Special Rapporteur for Freedom of Expression in the Inter American System. From 1994 to 1998 Mr. Canton was Director for Latin America and the Caribbean for the National Democratic Institute for International Affairs (NDI). He has also served as a political assistant to President Carter in democratic development programs in countries in Latin America. In 2005, Mr. Canton was awarded the Chapultepec Grand Prize for his contributions to the promotion, development, strengthening and defense of the principles of freedom of expression throughout the Americas. Mr. Canton holds a law degree from the University of Buenos Aires and a Master degree in International Law from the Washington College of Law of American University.

More on the report