Convivencia Debates: Issues and Methods in the Study of the History of interreligious contact in Medieval and Early Modern Iberia

The term Convivencia has been a contentious term in Iberian historiography used to describe the period in Muslim and Christian medieval rule when the three Abrahamic Faiths are said to have co-existed peacefully. This period is contrasted with the subsequent Reconquista, and the subsequent forced conversions of Jews and Muslims in the sixteenth century, and the expulsions of Jews in 1492 and the Muslims in 1609. The term has become commonplace for popularisers of the “Golden Age” view of Iberian medieval interfaith relations. However, this has drawn the ire of academics as it is considered an unjustified imaginary idealisation of a much more complex reality of competition and conflict. The post 9/11 political climate with the War on Terror, and European responses to Muslim citizens as well as anxieties over recent Muslim migrants, has heightened the stakes, as both Islamist groups and nativist European nationalists have polemically laid claim to the long Muslim presence in Iberian history. Questions that will be addressed are:

1. How are scholars to approach the term and concept of Convivencia as a framing device for medieval Iberia? By accepting it, qualifying it, or, in my view, explaining the reasons for controversy behind it?

2. What are the historical parallels to (a) the controversy over such a term in Christian-Muslim relations, and (b) avenues for comparisons in contemporaneous situations, such as Ottoman religious interrelations?

3. How do the concepts and debates surrounding the term Convivencia relate to other contested concepts in Iberian historiography, such as “Orientalism” , "Tolerance" and Early Modern Iberian “Race” (Limpieza de sangre)? What will an investigation of these related terms yield as historians approach these terms and Convivencia in a comparative analysis?

PhD students can receive 1 EC for participation and by writing an assignment. For more information, please contact G.A.Wiegers@uva.nl, 020-5252104.

Admission is free, but registration before 7 June is obligatory. Please, write to Nanda de Groot at the Department of Religious Studies, mail: secr-religiewetenschappen-fgw@uva.nl, tel. 020-5252010. 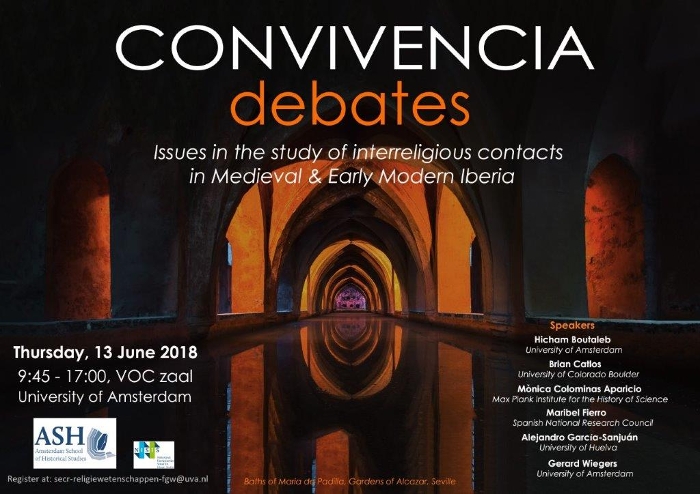 “Convivencia and Conveniencia: “Toleration” and Convenience in Medieval Spain and Beyond - Dr Brian Catlos, University of Colorado Boulder

Debates regarding the nature of Muslim-Christian-Jewish relations in medieval al-Andalus and the Christian Spains remain largely mired in arguments revolving around the supposed tolerance or intolerance of Islamic and Christian societies in the Middle Ages, based on positions that reflect the predilections and biases of modern scholars as much or more than social, cultural and political realities of the time. The term convivencia has become so loaded as to render it useless. This paper proposes that we think of these relations on terms of conveniencia – in which the perceive alignments or conflicts of agenda among religious communities and their constituent members, rather than broader “civilizational” characteristics can be seen as shaping this history.

Dispelling the myth of al-Andalus? History as the continuation of war by other means - Dr Alejandro García-Sanjuán, Huelva University

In recent years, the dispelling of the so-called myth of al-Andalus has gained currency as a new consolidated scholarly approach to Medieval Iberian history. This fresh tendency originated in Spain a little less than twenty years ago and since then it has been pouring gradually to foreign academic environments, the best evidence so far of this process being the book by Fernandez-Morera (The myth of al-Andalus), published in the USA in 2016. In this talk my aim is showing that, in spite of its scholarly status, the aforementioned tendency has nothing to do with any real attempt for improving our understanding about the past. Whether explicitly or implicitly, the goals and interest of those promoting this approach are beyond the limits of historical knowledge

Concepts of Convivencia’: contours of an evolving debat - Hicham Boutaleb, MA, PhD student at the University of Amsterdam

In my PhD research project, devoted to the analysis of current debates about Iberian inter-communal relations I argue that these debates miss the mark by being limited to the paradigms established within Spanish nationalist historiography. The controversies are fixated too narrowly on the Spanish noun ’Convivencia’ and its historiographical baggage, like ‘Tolerance’.  I argue in my talk that one can meaningfully use the term within limits. Discarding it may clarify little. By linking the discussions of Iberian medieval Jewish-Christian-Muslim co-existence to their instances in other settings, it will de-nationalise the debate and clarify the terminology. I propose a cross-discipline comparison of interfaith relations absorbing findings of the burgeoning Mediterranean studies.

New theories about the end of Convivencia and what they tell us about religious diversity in Iberian History  - Professor Gerard Wiegers, University of Amsterdam

This paper will critically review two recent theories about the end of religious diversity in Iberia in general and the Granada in particular. First of all, I am interested in the dynamics between Castile and Granada in the fifteenth century in the recent theory of Enrique Soria Mesa with regard to the persistence of Islam, even after 1609, and secondly in the theory of Trevor Dadson and others, which aims to offer a radical revision of ‘convivencia’ in a related way. New historical evidence, they say, shows that many Moriscos, descendants of forcibly converted Muslims, returned to Spain after their expulsion in 1609 while many others were able to successfully evade that measure and able to continue their lives in Spain until the present day.

Great variance is found within the academia about Convivencia as a social fact that prompts the harmonious living together between individuals and communities of different origin. The critique goes from nuancing the meaning of the term to its total dismissal for being unfitted to explain these relationships. We observe a penchant in current debates for seeking substitutes to the Convivencia, indeed, with some approaches gaining traction among scholars.

By contrast, we propose to redirect the debate towards an ethical approach to Convivencia that focuses on the dialectics between the acknowledgement of the others’ irreducible otherness in face-to-face contact (inter-ethics), and the norms and values that often anticipate experience and recast it to fit particular worldviews in religious systems (intra-ethics). It will be argued that it is precisely the interplay between the two that what helps to secure or break harmony in a society marked by social or religious difference and salvages the Convivencia.

Al-Andalus and the reading of the past from the present: the missing voice - Professor Maribel Fierro, Spanish National Research Council, Madrid

The reasons that explain why al-Andalus has become associated with religious tolerance and intercultural exchange have been studied by a number of scholars who have established the share of responsibility according to the different periods of time, and the religious and ethnic background of those who put forward such representation. Among them, the European Jews in the 19th century who looked for models of social and cultural integration, the Spaniard Américo Castro (1885-1972) who suffered exile after a traumatic civil war (1936-1939) and the American scholar of Cuban background Maria Rosa Menocal (1953-2012) who reacted to the aftermath of September 11. But the view that the Andalusis themselves had of their own society had not been paid much attention. This is the ‘missing’ voice that I will try to recover.

For more information on how to obtain 1 EC, please read the course description carefully and contact Professor Gerard Wiegers.